Cummins and GILLIG announced the production of the 100th GILLIG battery-electric bus built since the two companies began partnering on the heavy-duty transit vehicle. (Earlier post.) The milestone bus will be delivered to Metro Transit in St. Louis, Missouri this month. The companies have collaborated since 2019 to bring reliable zero-emissions electric buses to communities across the country. 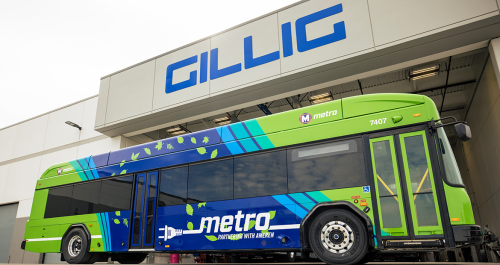 More than 50 transit agencies have already purchased or have orders for the electric bus. GILLIG is currently booking new bus orders into 2023.

GILLIG and Cummins have extensive experience in vehicle electrification. GILLIG established best practices and validated many of the technologies used in today’s electric buses through the generations of diesel-electric hybrid and overhead trolley electric buses built to date and its first-generation fuel cell buses, which were deployed in 2001.

Cummins demonstrated its first all-electric truck in 2017 after more than a decade of research and technology development, and has since delivered hundreds of electrified powertrains across a variety of applications.

Since GILLIG’s second-generation battery-electric bus was unveiled in 2019, the companies have worked together to deliver the most reliable and durable electric bus in service. The bus builds upon the legacy of excellence and proven transit performance of the more than 27,000 GILLIG buses in service throughout the United States today.

The companies partnered to conduct thorough validation testing to ensure the safety and performance of the bus and powertrain in harsh environments. In addition, the electric bus completed testing with the Federal Transit Administration’s Bus Test Program in Altoona, Pennsylvania, in July, where it scored exceptionally well in all measurement categories, especially for durability and performance.