HYVIA, the joint venture between Renault Group and Plug Power (earlier post), has unveiled the Renault Master Van H2-TECH prototype. A large van for transporting goods, with 12 m3 of cargo volume and a range of up to 500 km, the van will be available in 2022. 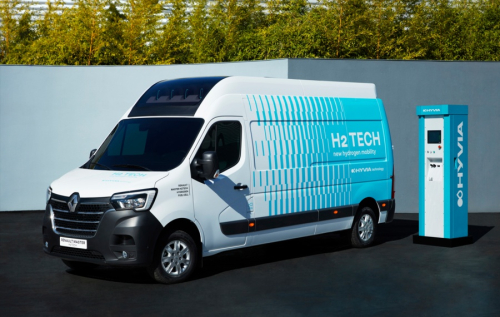 Master Van H2-TECH is equipped with a 30kW fuel cell, a 33kWh battery and tanks containing 6kg of hydrogen (4 tanks of 1.5 kg each).

The Master Van is produced in France, at Renault’s Batilly plant. Electric and hydrogen integration is realized by PVI, a Renault Group subsidiary in Gretz-Armainvilliers. The e-motor is produced at Renault’s Cleon plant. Fuel cell assembly will begin at Flins plant by the end of the year. The hydrogen tanks will be sourced in France, from Faurecia.

HYVIA also unveiled its Hydrogen Refueling Station prototype. These prototypes are a first illustration of the complete HYVIA ecosystem including green hydrogen production and distribution, with a range of fuel cell-powered light commercial vehicles. (Earlier post.)

HYVIA’s Hydrogen Refueling Station allows a fast 5-minute fueling time. Hydrogen supplied will either be generated on-site using water electrolysis or supplied in bulk using gaseous tube trailers. The system compresses hydrogen into storage, before dispensing it into the vehicle when needed.

HYVIA’s Hydrogen Refueling Stations will be available to purchase, lease or rent. They will be assembled in France, at Flins factory.

The next prototypes to come will be: