This funding will enable Universal Hydrogen to conduct the first test flight of its hydrogen fuel cell powertrain on a 40+ passenger regional airliner in 2022 at Moses Lake, Washington.

The green hydrogen for the flight will be supplied using Universal Hydrogen’s modular fuel capsules that enable the delivery of hydrogen from the point of production directly to the aircraft using the existing freight network and airport cargo handling equipment without the need for any new infrastructure.

The proprietary modular capsule technology is significantly lighter than the current state of the art in hydrogen storage and is designed from first principles for flight and ground transport safety certification. 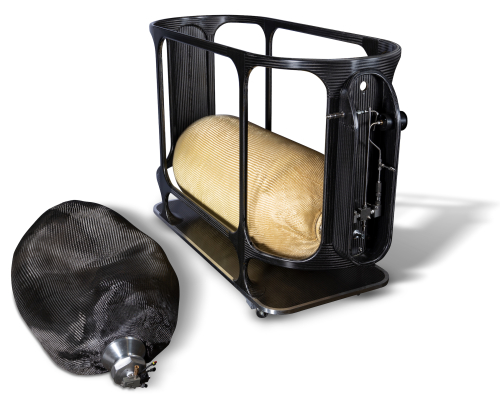 The company anticipates entry into commercial service in 2025 with a certified retrofit conversion kit for existing ATR 72 and De Havilland Canada Dash-8 regional airliners and a green hydrogen fuel services offering. Together, these will provide regional operators with unit economics that are equivalent or better than those of conventional jet fuel-powered variants of the aircraft.

While regional aviation represents a sizable market opportunity and an important early proof point in the fight against climate change, it is a small fraction of total aviation emissions. If we want to decarbonize the industry on the timeframe of the Paris Agreement, the world’s narrowbody airliner fleet has to become hydrogen-powered starting in the 2030s. There is no known alternative technology to get there.

To that end, the company is committed to collaborating with all key stakeholders, including airlines, lessors, airplane- and engine-makers to ensure that the next generation of narrowbody aircraft (succeeding the 737 and A320 families) are true zero-emissions vehicles.

The gravity of climate change is forcing a tipping point in the green hydrogen ecosystem of producers, distributors, and consumers. Universal Hydrogen has the breakthrough technology, talented team, and operational urgency to emerge as the distribution leader in this hydrogen ecosystem. As early investors, we are proud to continue to support their efforts in any way we can.

Headquartered in Los Angeles, California, with an engineering center in Toulouse, France, and a flight test center in Moses Lake, Washington, Universal Hydrogen is rapidly growing its team.

What is the range of an ATR 72 going to be fuelled by gaseous hydrogen and how many seats will be lost? Liquid hydrogen takes up 4 times the volume of kerosene so with gaseous - you will be down to a sixth of the range, maybe less, even with fuel cells and electric motors.


As for "no known alternative technology" the statement would be funny, as Mr Eremenko either has the ability to keep a straight face while enunciating one of the biggest "economical with the truth" nesses of all time or is like most people woefully ignorant of the truth, if the consequences of 100 years of suppression of real science and innovation had not been so tragic - but it was meant to be. And is.


Try a self running supercritical CO2 heat engine operating through the critical point Mr Eremenko - oh no, contravenes the hallowed "Second law" of Thermodynamics dreamt up at a time when the most advanced machine on the planet was a Puffing Billy. Steam engines. Still using them today. Ilya Prigogine must still be shaking his head in despair.

?? What in the world are you talking about?

Liquid hydrogen is more, not less, energy dense than kerosene, although to be sure that gets knocked back by the containment system to keep it cooled.

The difference is Volume vs Mass.
From: https://www.energy.gov/eere/fuelcells/hydrogen-storage
On a mass basis, hydrogen has nearly three times the energy content of gasoline—120 MJ/kg for hydrogen versus 44 MJ/kg for gasoline. On a volume basis, however, the situation is reversed; liquid hydrogen has a density of 8 MJ/L whereas gasoline has a density of 32 MJ/L, as shown in the figure comparing energy densities of fuels based on lower heating values.

@SJC,
ON A VOLUME BASIS LH2 TAKES UP 4 TIMES THE VOLUME OF JET FUEL
Your numbers were in my post if you read it correctly.

Weight is important in aviation

I can think of several other alternative technologies for green aviation. First is one of the sustainable aviation fuels which may or may not require hydrogen to be produced. Depending on the required range, lithium sulfur batteries might work just fine and be a whole lot cheaper on a seat mile basis.

The Argonne white paper from last month suggests that with 800 kWhr/kg, it would be possible to build a battery electric 737 class aircraft and that is within the range of Lithium Sulfur.

I made this spreadsheet to calculate battery aircraft range based on the formulas in the reference below:
https://docs.google.com/spreadsheets/d/151jbPanQA8khuWV-ONF7jfbctET235f0

Aluminum air seems to have high enough energy and volumetric density, but has had very little consideration.
4800 miles will be the limit with Al-Air batteries which can cover 98% of flight seats (See Flight Stats tab)

True "sustainable aviation fuels" have to be zero carbon emissions OR (1) Not displace any food production, (2) emit zero trace GHG's (NOx...), and (3) remove an equal amount of carbon from the atmosphere.

Thanks for the spreadsheet and other information. I noticed that you used 500 Whr/kg for you battery calculations while Lyten seems to think that they can reach 900 Whr/kg but that is still speculation and maybe cell level instead of module level.

Anyway, I think that we will see battery electric commuter aircraft within this decade simply based on economics. And maybe we will see larger planes for shorter distance intercity flights. From your flight stats, most flights are under 750 miles.

If you could get lithium air to work and that is a big IF, you could build aircraft ever bit as capable as jet fueled aircraft. I do not expect to live long enough to see this or fusion power either but you need to stay hopeful.