Maersk Growth, the corporate venture arm of A.P. Moller - Maersk, has invested in Vertoro, a Dutch start-up focused on developing liquid lignin technology which can be used as a marine fuel.

Vertoro is a spin-off from a public-private partnership between Brightlands Chemelot Campus, DSM, Chemelot InSciTe, University of Maastricht (UM) and Eindhoven University of Technology (TU/e). The company is capital-backed and university-backed, with a novel and protected approach to transforming woody and agricultural residues into a wide range of bio-based chemicals, materials, and fuels. The company calls its lignin-based liquid products “Goldilocks”. 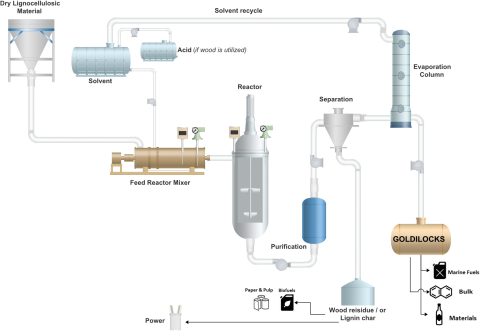 Vertoro has also developed and patented (EP19200489.3) a sister process for producing Goldilocks directly from lignocellulosic biomass (i.e. woody residues) to resolve future issues on availability of biorefinery lignin. This process can also be applied on wide range of residual biomass streams.

In addition, due to this mild processing, the lignin Goldilocks remains in its natural polymeric structure, slightly fragmented in the form of oligomers, which are now meltable and soluble in any polar organic solvent. Since this configuration is maintained, Vertoro is able to keep all high-value functionalities of lignin that are lost when broken into monomers, as current approaches do. These features are later transferred to the resulting materials, fuels or chemicals, thereby greatly improving their properties.

Maersk’s investment will be used to develop further and to commercialize Vertoro’s patented liquid lignin technology, and it will enable Vertoro to build a demo plant, which will become operational in 2022.

The output of this plant will be used to develop further marine fuels in partnership with Maersk as well as other applications for the materials and chemicals markets.

The minority investment supports A.P. Moller - Maersk’s work to decarbonize marine operations. Maersk expects several fuel types to exist alongside each other in the future and has identified four potential fuel pathways to decarbonization: biodiesel, alcohols, ammonia, and lignin-enhanced alcohols. Lignin is a class of complex organic polymers which form key structural materials in the support tissues of most plants.

Lignin fuels have a promising potential when it comes to decarbonizing shipping. We consider Vertoro to be a leading start-up in the sustainable biomass-to-liquids space and we are excited to invest in the company and become part of the efforts to effectively scale up production of green fuels. Furthermore, we believe that we can offer value beyond capital through the expertise and scale of the broader Maersk organization.

The investment in Vertoro is the third investment in the fuels of the future from Maersk Growth in less than two months. In September Maersk Growth invested in WasteFuel, a start-up focused on turning waste into sustainable aviation fuel, green bio-methanol, and renewable natural gas. (Earlier post.) Later followed the investment in Prometheus which is developing a direct air capture-technology to enable cost efficient, carbon neutral electro fuels. (Earlier post.)

These investment activities underline how Maersk Growth has added green fuels as an additional sub-investment theme under their overall umbrella of supply chain investments. Furthermore, these investments are part of the A.P. Moller - Maersk journey to become carbon neutral by 2050. Maersk recently announced a total of nine vessels capable of running on green methanol. (Earlier post.)

Vertoro, founded in 2017 and based on the Brightlands Chemelot Campus (Geleen, Netherlands), produces Goldilocks exclusively from sustainably sourced forestry and agricultural residues by means of a patented thermochemical process. Like fossil oil, Goldilocks can be used as a platform for fuel, chemical and material applications. It is already sold into markets as diverse as antioxidants and marine fuel. Vertoro’s side stream is cellulose, which can be used to produce bio-based materials and chemicals, such as paper and ethanol, respectively.

You can get lignin from cellulose ethanol