The California Air Resources Board has released the final version of the light-duty hydrogen fueling station self-sufficiency report, pursuant to the requirements of Assembly Bill 8 (2013).A self-sufficient network demonstrates the ability to continue operations and growth without further State financial support.

The self-sufficiency study evaluates the economics of potential future scenarios for growth in California’s network of hydrogen fueling stations, assesses the amount of State support that could maintain network growth and operation until the network demonstrates self-sufficiency, and estimates the timing to achieve self-sufficiency.

The scenario analysis methodology estimates the incoming and outgoing cash flows related to building (through 2035) and operating (through 2050) a network of hydrogen fueling stations in California. Each scenario is defined by a target number of FCEVs to support (ranging from 300,000 to 1.8 million vehicles at 100% station utilization by 2035); a network buildout strategy (in terms of numbers of stations per year, their locations, and their fueling capacities); and cost and revenue assumptions (including capital and operating costs and changes in price paid at the pump over time).

Each scenario adopts a unique set of assumptions for these variables, with more than 840 individual scenarios investigated in the report. The collection of scenarios represents high and low bounds of what CARB staff propose to be reasonable estimates for each variable that affects the economics of station development and operation. 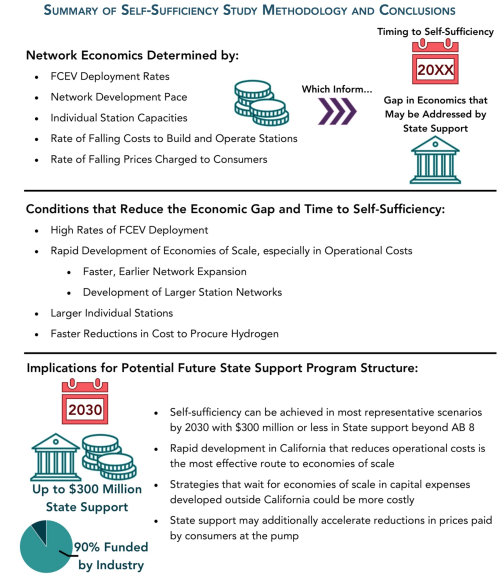 In addition, several key observations from this investigation can inform future planning for a transition to a self-sufficient hydrogen fueling network.

Hypedrogen has ALWAYS had lots of state support, wherever it has been rolled out.  It is a very inefficient way to store and deliver non-fossil energy; always has been, always will be.  Why does it need even MORE state subsidies beyond what are already given to "renewables"... which are not actually "green"?

The state shouldn't spend anymore of our tax money until The H2 advocates (oil companies/auto companies) can prove H2 cars are as feasible as BEVs are proving to be.

They are just pouring money and energy down a rat hole. It should be clear by now that fuel cells are not going to be used for light duty vehicles in any large scale volume. Maybe you could make an argument for using fuel cells for long haul trucking but if I had to make a bet, I would bet against it. It is simply economics. The energy and money cost of producing hydrogen is too high unless you assume that you can use high temperature nuclear thermal chemical production of hydrogen. But California's NIMBY's are never going to approve that.