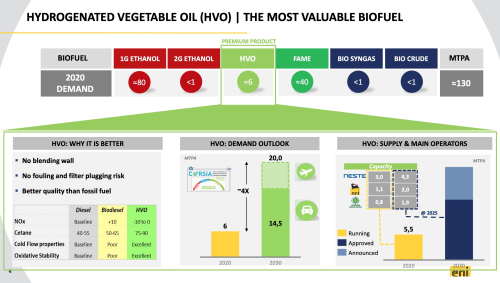 Eni is planning on significant increases in its HVO production, and very strong growth in biojet. (“HVO: Demand Outlook”)

Eni SAFs are produced exclusively from waste and residues, in line with the company’s strategic decision not to use palm oil from 2023.

This is a very important milestone in our journey to decarbonize and fully reflects our pragmatic approach to the energy transition. This approach involves using technology to cut emissions in sectors such as aviation, which are high emitters but at the same time need to be nurtured because they are crucial to growth and development. We are committed to being a technological leader in the energy transition, leveraging existing skills and assets, and this is a further step in that direction, as well as an important contribution at system level.

Initially, SAF is being produced at the Eni refinery in Taranto, with a 0.5% share of UCO (used cooking oils), contributing to the 2% share of bio component proposed as part of the EU “Fit For 55” package. This is a first step and part of Eni’s commitment to the decarbonization of all its products and processes by 2050 for all sectors, including some of the most challenging such as the aviation, heavy vehicles and marine sectors.

SAF from the Taranto refinery is currently produced through a 0.5% UCO co-feeding process for conventional plants. According to the Renewable Energy Directive II, the bio share in the product typically allows for a more than 90% reduction in GHG emissions compared to standard fossil mix feedstock. This product, already available in Taranto refinery tanks, will be sold to major airlines, firstly ITA, thanks to the support of leading operators in the sector such as Aeroporti di Roma.

Eni’s SAF production will continue to grow with the start of production of over 10 thousand tonnes/year of SAF at Eni’s Livorno refinery in early 2022, through the distillation of bio-components produced in Eni’s bio-refineries in Gela and Porto Marghera (Venice) using Eni’s proprietary Ecofining technology. The raw materials used will be exclusively waste products such as UCO or fats. This product, called “Eni Biojet”, contains 100% biogenic component and can be combined with conventional jet fuel in an up to 50% mix.

Growth will continue with the launch, in 2024, of Eni Biojet production at the Gela biorefinery, where a project is already underway for the introduction of a further 150 thousand tonnes/year of SAF from 100% renewable raw materials, capable of meeting the Italian market’s potential obligation by 2025.

Aviation will need high energy density liquid fuels forever. SAF's is the only way we will be cleanly flying well into the distant future. Those that think electrification of airline travel is somehow possible, ignore or don't understand the number of challenges. With that in mind, I believe SAF's should rapidly become blended into, and part of our jet fuel supplies. With ever increasing blends. Gulfstream Aerospace was using a 25% blend successfully. No noted problems.

The heat of combustion, and the resulting high tailpipe temperatures, allow high speed tailpipe airflow due to a high stagnation point. This is what makes jet travel possible. An electric motor driving a fan can't do this.

SAF burns in a jet engine the same as plain old jet fuel does; and, it produces just as much GHG and pollution; The emissions reduction is from the care exercised in the rest of the life cycle for SAF that is not realized processing fossil fuel and its feed stock(fossil oil). The oil companies run a dirty ship so to speak and they have made a lot of money for a hundred years not caring about the environment.
There is no reason to give up on clean energy for aviation at this juncture because research for answers to high altitude pollution by jet engines is underway. Some believe the first usages of electric planes will be in general aviation travel, followed by fast intermediate distance airline travel. At this point, there's not a rosy future; but, who knows what might be discovered in the great labs of this nation?