Volkswagen Group doubles deliveries of battery-electric vehicles in Q3 to 122,100

Despite a shortage of semiconductors, the Volkswagen Group delivered 122,100 BEVs (battery-electric vehicles) to customers in the third quarter (July to September), an increase of 109% compared with the prior-year quarter. The market ramp-up in China accelerated significantly in Q3, where 28,900 BEVs were delivered, compared with 18,300 in the first half of the year. 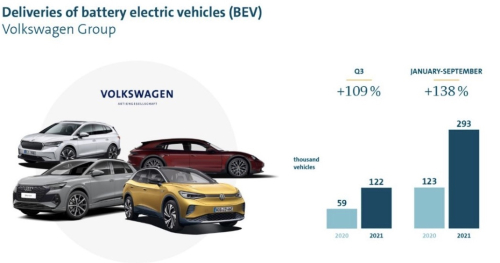 The BEV share of total deliveries rose to more than 6% in Q3. A total of 293,100 BEVs were delivered worldwide by the end of September, more than twice as many as in the prior-year period (+138%).

There also continued to be strong demand for vehicles with a plug-in hybrid drive (PHEVs). A total of 246,000 PHEVs were delivered in the first nine months, more than twice as many as in the prior-year period (+133%).

In terms of BEV deliveries by region, Europe was still clearly in the lead, with 209,800 vehicles (share of 72%). The Group was the market leader here, accounting for a BEV market share of around 26%. In the US, the Group delivered 27,300 BEVs, which corresponded to 9% of its global BEV deliveries. This gave the Group a market share of around 8% in the all-electric vehicle segment, putting it in the number two position.

In China, 47,200 BEVs were delivered by the end of September; this represents 16% of the Group’s global BEV deliveries. In the third quarter, the accelerated market ramp-up meant that China accounted for a share of 24%.

As planned, we significantly accelerated the BEV market ramp-up in China in the third quarter, and we are on track to meeting our target for the year of delivering 80,000 to 100,000 vehicles of the ID. model family.

The top 5 BEV models in the nine-month period were as follows: 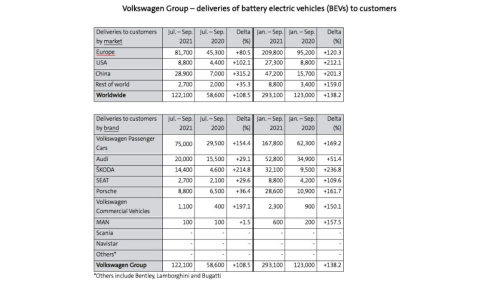