Toyota Alabama is the sole producer of both engine models for the 2022 Tundra in North America, creating long–term employment stability for the plant’s 1,800 workers. 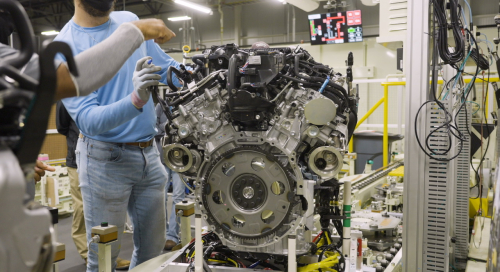 The new i-FORCE MAX powertrain—the hybrid option—uses the same platform as the gasoline only twin-turbo V6, but features a motor generator with a clutch located within the bell housing between the engine and 10-speed automatic transmission. In essence, the motor generator is built in-line to provide additional power that is transferred efficiently via the transmission, while the engine start-up, EV driving, electric assist and energy regeneration are solely done via the parallel hybrid components.

Both of the twin-turbo V6 engine options for the 2022 Tundra are being built on the longest Toyota engine line in North America—142 yards (130 meters). The V6 Turbo line will produce a new engine every 58 seconds, with a capacity to build 18,000 engines each month. These additional engines push the total capacity for Toyota Alabama engine production to up to 900,000 engines per year.