Volkswagen has continued to evolve its small displacement turbocharging technology with each new engine generation. Volkswagen’s workhorse engine family—the four-cylinder EA888—is applied in much of the product portfolio—as well as that of many of the company’s subsidiary brands—in varying displacements and specifications.

In 2022, the fourth evolution of the EA888 pushes state-of-the-art turbocharged engine design further still; it is one of the most advanced Volkswagen engines ever built. Known internally and to Volkswagen enthusiasts as the “Evo4,” its two most difficult roles might be under the hood of the 2022 Golf GTI and R. 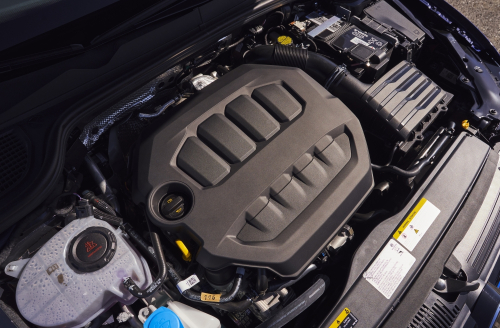 Built in Gyor, Hungary, these turbocharged and direct-injected EA888 Evo4 variants displace 2.0 liters (1,984 cc). Both use very high static compression ratios for turbocharged engines: 9.3:1 for the Golf R and 9.6:1 for the GTI.

Double overhead camshafts are chain-driven to increase longevity and reliability, and support four valves per cylinder. Both intake and exhaust camshafts feature continuously variable valve timing, and the exhaust camshaft further adds variable valve lift and duration through the use of two distinct camshaft lobe profiles. In combination, these systems present a wide range of adjustability, allowing Volkswagen engineers to calibrate for a broad sphere of driving situations.

The dual systems—continuously variable valve timing and variable valve lift—work together in milliseconds to ensure spent gases are evacuated quickly, allowing the turbocharger to spool very early. This results in rapid torque delivery across a very wide rpm range. In this way, the EA888 is able to accomplish the goal of being very tractable at low rpm, but continues to make more horsepower as engine revs increase.

A further benefit the systems offer is the ability to use longer final drive ratios in the transmission, effectively downspeeding the engine, which can positively affect fuel economy.

From the moment air is introduced into the 2.0-liter EA888, a specially designed charge-motion flap in the intake manifold closes asymmetrically to induce a combined swirling and tumbling flow motion in the air/fuel charge. While its primary benefit is to aid in the mixing of air and fuel, it also helps to realize an increase in efficiency by allowing clean air to enter the marginal areas of the combustion chamber, even at low engine speeds. At high engine speeds, the flap closes, and maximum power can be achieved.

As the air enters the combustion chamber, fuel is delivered to the four fuel injectors by an updated high-pressure direct-fuel-injection system at 5,076 pounds per square inch, compared to 2,900 psi on the previous generation EA888 Golf GTI engine.

In combination with an advanced turbocharger, this contributes to the full availability of its torque potential at very low engine revs, where it is called upon most often in daily driving.

The EA888 utilizes a unique exhaust manifold design that is completely contained inside the cylinder head; it can thus be said that the compact turbocharger mounts directly to the engine. This placement allows for rapid warm up and greater thermal management of the exhaust stream, increasing efficiency.

Exhaust gases exit the cylinder head outlets via twin channels to a point just short of the turbine wheel; this helps allow for incredibly quick spool-up times and low lag characteristics. To regulate the exceptionally fast buildup of boost pressure, a highly sensitive electronic wastegate is integrated directly behind the turbine.

To make such proximal fitment possible, a special turbocharger is used that can withstand the extremely high temperatures present so near the combustion chambers—up to 1796 ˚F (980 ˚C). Due to the unit’s heat tolerance, there isn’t the need for complex fuel enrichment algorithms under high load, allowing the EA888 to maximize efficiency while at the same time delivering maximum boost.

The EA888 Evo4 engine under either hood can be paired with a 6-speed manual or a 7-speed DSG transmission in North America. Elsewhere in the world, even in Germany, the Golf R isn’t available with a manual transmission.