Hydra offers a proven hydrogen-diesel, co-combustion retrofit approach; the retrofitted engines can run up to 40% hydrogen, with a concomittant reduction in emissions. Hydra has completed three years of successful on-road testing of the hydrogen-diesel, co-combustion injection system proving no loss in fuel efficiency, range, power, torque, or payload capacity and a carbon emissions reduction of up to 40% per converted truck. 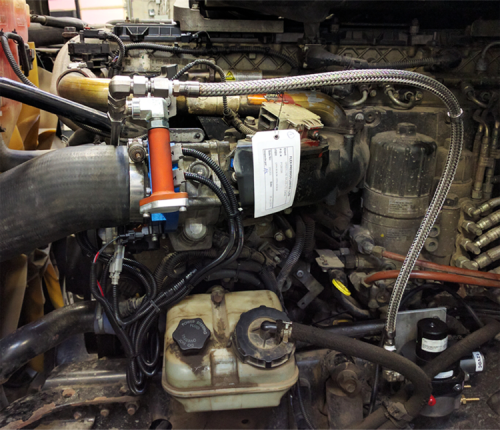 Lodgewood Enterprises, a full service short- and long-haul trucking company based out of Prince George, British Columbia, received the initial truck marking the first of 12 semi-trucks to be converted with Hydra’s fully reversible, hydrogen-diesel conversion kit at no cost to Lodgewood. The clean trucks will run on low-carbon hydrogen at a fixed discount below the cost of diesel which Hydra has sourced from Canadian industrial chemical provider, Chemtrade.

As a fleet owner, it was an easy decision to adopt Hydra’s low risk, co-combustion technology and to begin reducing emissions immediately without negatively impacting truck performance, warranty, and driver experience. Our converted fleet stands to reduce CO2 emissions by over 800 tonnes per year helping us also attract a newer, younger generation of drivers concerned with the environment. And we've lowered our fuel costs in the process. We’re proud to have one of the first hydrogen-converted trucks on the road and look forward to our continued partnership with Hydra. Hydra pays for and installs fully reversible, hydrogen-diesel, co-combustion conversion kits into commercial fleet trucks and the necessary fueling stations reducing risk and investment for fleet customers. Further risk reduction was achieved with Hydra’s completion of a successful three-year pilot test program in Prince George covering more than 200,000 km on commercial routes with commercial drivers tackling the freezing temperatures and uphill climbs for which the region is known.

Lodgewood is the ideal first customer due to their location within BC, their return-to-base routes, and their eagerness to adopt new technologies. They also now benefit from the CleanBC Heavy-duty Vehicle Efficiency Program Incentives administered by the BC Trucking Association and the Province of British Columbia’s expansion of hydrogen-powered vehicle weight allowances by 1,000 kg, allowing for the addition of hydrogen tanks with no loss of payload to fleets. We look forward to delivering their next hydrogen-converted trucks and to working with other commodity haulers looking to switch to clean trucking sooner than later.

Other fleet owners in the Prince George area with round trips no longer than 1,000 km can test out the Lodgewood converted truck and sign on to have their trucks converted later next year. This is when the hydrogen capture at Chemtrade’s local plant will be completed, and low-carbon hydrogen fuel will be flowing.

Hydra’s technology has been in development since 2012. Moving from prototype to commercially proven technology has been possible due to the support of the Government of Canada’s Innovation Research Assistance Program (IRAP), the Low Carbon Economy Fund (LCEF), Sustainable Development Technology Canada (SDTC), Innovate BC, the Northern Development Initiative Trust (NDIT), NSERC, MITACS, and Just Business.

OK, it's not perfect, but it is better than doing nothing.
40% hydrogen - 60% diesel, better than 100% diesel.
One question: where does the H2 come from - steam reformation of methane or hydrolysis?
If it is from methane, why not just use the methane directly and stop trying to coat it with green sugar.
If from hydrolysis, proceed as planned.
Also, I wonder can they go to 50 and 60% H2?

It says above that they are using by-product hydrogen from industrial processes, a lot of which is just flared at the moment.

It is clear now that hydrogen infrastructure is going to be set up around the world, and that half way technologies like hydrogen ICE will enable that before we start getting more sophisticated technologies on the road.

@Dave:
OK, I see it now: "delivers immediate off-takers for chemical companies’ by-product hydrogen ".
I wonder
a: what they are doing currently (flaring as you say ?)
b: What happens after the source is fully deployed - do they call it a day or do they keep going with H2 from "somewhere"?
c: How much of this by-produce H2 there is, globally ?
You would imagine that it all should be gobbled up quite soon, with various green initiatives (like this one).

There are substantial amounts worldwide of by product hydrogen, for instance South Korea is using a lot of it, and from memory some years ago said that their first 500,000 or so FCEV cars could run on that resource.

Of course it is not infinite in supply, but until other sources ramp up provides a good kick start to supply.

@Gdb
Way cleaner than what we are doing at the moment, and unfortunately perfect solutions are not always available immediately on demand.

This is a hybrid, and there are all sorts of ways of combining hydrogen with diesel, with different amounts of NOx, so without the full technical details which I can't spot we can't really be too definitive about what the emissions will be.

Yes you can read the research

NOx emissions up to six times that of methane
https://www.cleanegroup.org/hydrogen-hype-in-the-air/

produces a higher amount of NO
than when operated with natural gas
https://escholarship.org/content/qt60t3f922/qt60t3f922.pdf

This has to be the WTF vehicle of the month. You would be better off just running CNG with a diesel pilot injection.