INOVYN, a subsidiary of INEOS, plans to upgrade existing production at its Runcorn Site so that it can supply compressed fuel-cell quality hydrogen to mobility and power generation sectors. This is part of more than €2 billion investment in green hydrogen announced by INEOS earlier. (Earlier post.) 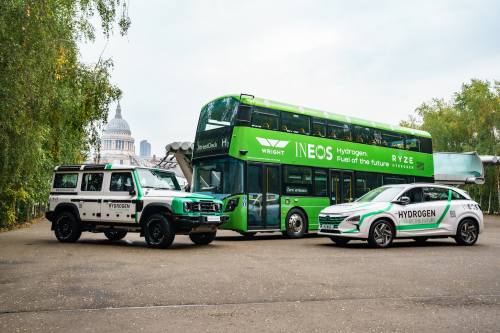 INOVYN, which has been producing and using low-carbon hydrogen at its Runcorn Site for more than 100 years, is set to ramp up the supply of hydrogen to fuel the UK’s transport network.

Specifically, the investment will deliver dedicated on-site facilities for the purification and compression of existing low-carbon, fuel-cell quality hydrogen for subsequent loading and transportation and distribution to fueling stations across the UK.

Hydrogen production at Runcorn Site has the potential to provide low-carbon fuel to power more than 1,000 buses or 2,000 trucks, where battery electric drive systems are not appropriate due to range, payload and critical refueling times.

INOVYN is already Europe’s largest operator of electrolysis technology, which is used to make clean hydrogen. The investment at the site will kick-start the emerging hydrogen market and further support the North West’s regional commitment to carbon neutrality.

Our expanding portfolio of clean hydrogen projects strengthens INOVYN’s sustainability strategy and supports the drive to net-zero across the UK and the rest of Europe. INOVYN is in a unique position to reaffirm its expertise in hydrogen production and electrolysis, and to progress the green energy transition through the use of clean hydrogen.

The project builds on INOVYN’s hydrogen portfolio within the UK, including its involvement with consortiums such as HyNet North West, a clean hydrogen development project underpinned by INOVYN’s storage technology infrastructure to unlock low-carbon energy for the North West of England and North Wales.

INOVYN and its parent company INEOS are involved in multiple projects across Europe to develop green hydrogen and to replace existing carbon-based sources of energy, feedstocks and fuel. The group will work closely with national and European governments to facilitate hydrogen’s significant role in the new Green Economy.

There are good uses for green hydrogen such as the production of ammonia and as a precursor for other industrial chemicals and maybe direct reduction of iron ore. However, producing hydrogen for fuels cells for transportation and power generation would seem to be a waste of electrical energy. In the article about 10 days ago, the UK-based Zemo Partnership recommended that "UK Government policy should increase its focus on the well-to-wheel (WTW) greenhouse gas (GHG) emissions and overall energy efficiency performance of new fuels for transport. While hydrogen, electric and renewable fuels can all radically cut emissions compared with their diesel-powered counterparts, there are major variations in their effectiveness and efficiency ..."

They found that the "well-to-wheel" efficiency of battery electric vehicles was between 4 and 6 times that hydrogen fuel cells vehicles. So until all electric power is green, i.e. renewable or nuclear, you will increase green house gases using fuel cells for vehicles or power generation. And unless the power is cheap, hydrogen will continue to cost much more.

I also noted that "The Runcorn Site produces 7,000 tonnes of hydrogen each year; INEOS as a whole produces around 400,000 tonnes a year of hydrogen ..." And the remaining 393,000 tonnes is grey hydrogen? Also, to put a bit of scale to the 7000 tonnes per year of hydrogen, I watched a coal train being loaded in Clear Creek, Utah with about 11,000 tons of coal which was going to Intermountain Power Project plant in Delta, Utah to supply LA with electric power. Also, they were planning on loading another train the same day. So until this is all green power....

@ sd:
I agree wholeheartedly with everything you've stated. I've been "preaching that in principle for years but alas, for the most part it has been falling on deaf (daft) ears.

I harbor the vague suspicion that the proponents of H2 and "Fool Cells" for mobility purposes are being subsidized by "big oil" for the direct and gratis support that they receive. "Only fools rush in where angels fear to tread".