TotalEnergies E&P Angola has exercised an option for the 7th-generation drillship Maersk Voyager to drill the ultra-deepwater Ondjaba-1 exploration well in Angola’s Block 48. 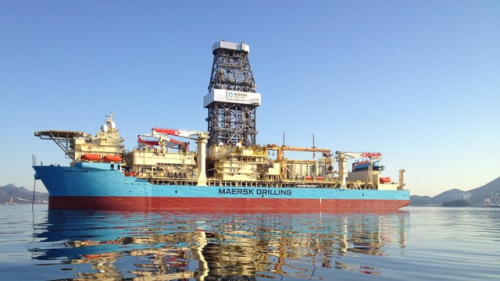 The Ondjaba-1 well will be drilled at a new world record water depth of 3,628 m (2.25 miles). The current world record is 3,400 m, set by Maersk Voyager’s sister drillship Maersk Venturer when it drilled the Raya-1 well for TotalEnergies offshore Uruguay in 2016.

Maersk Voyager is a high-spec ultra-deepwater drillship which was delivered in 2014; the ship is a Samsung 96K designed drillship with several Maersk Drilling upgrades. It is currently operating offshore Angola for TotalEnergies.

Maersk’s modern ultra-deepwater drillships feature an advanced positioning control system that automatically maintains a fixed position even in waves of up to 5.8 meters high and wind speeds of up to 26 meters per second (58 mph).

Each drillship is equipped with Multi Machine Control (MMC) on the drill floor, and this high degree of automation removescrews from the red zone and delivers an efficient and consistent performance.

The large deck space on the drillship can accommodate a full well test, completion and stimulation spread. This eliminates the need to demobilize equipment at different stages in the operation, thus lowering costs and increasing safety because of the reduced need for rigging heavy equipment up and down.

The contract extension has an estimated duration of 54 days, which means that Maersk Voyager is now contracted until February 2022.

The work on Ondjaba-1 commenced in October 2021, after which the rig is scheduled to move to Namibia to drill the Venus well. One one-well option remains on the contract.