New hydrogen production technology developed at the University of British Columbia (UBC) will be tested in a $7-million project between UBC, the government of Alberta and Alberta utility company ATCO.

The technology developed by the UBC researchers—thermal methane cracking (TMC)—can produce up to 200 kilograms of hydrogen a day using natural gas, without using water, while reducing or eliminating greenhouse gas emissions. The team will test their system at a facility in Fort Saskatchewan, Alberta, run by ATCO, Alberta’s largest natural gas distributor.

Currently, hydrogen can cost up to $15 per kilogram. The project aims to eventually drop this to less than $2 per kilogram—in line with goals set by the US Department of Energy to support hydrogen adoption. 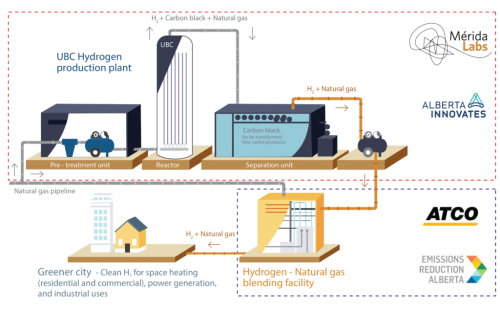 SMR still emits a significant amount of carbon dioxide and uses large quantities of water and energy. Water electrolysis is another method, but it is costly and can emit even more greenhouse gases than SMR if the electricity used is from non-renewable sources. In contrast, our thermal methane cracking method can produce zero emissions—its only byproduct is carbon black. 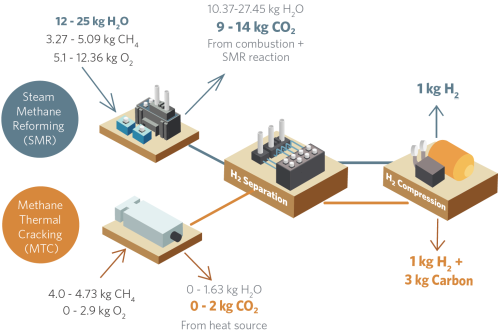 The methane cracking process does not produce CO or CO2 as byproducts, thereby eliminating the need for the water gas shift (WGS) reaction or CO2 removal. The process for CH4 decomposition is thus greatly simplified relative to steam reforming. UBC TMC uses liquid metals in a continuous process. Image: MéridaLabs

One way to do it would be to use nuclear heat.
Plus, you wonder how long the system will work before it all gets gunked u[ with carbon black.
Also, what are the "liquid metals" used - are they very rare ones or just nickel.

Another method but informative
The chemical reaction produces hydrogen as solid carbon accumulates on the catalyst.
After this, an acid wash separates the carbon products from the metallic catalyst precursors.
https://www.pnnl.gov/news-media/new-clean-energy-process-converts-methane-hydrogen-zero-carbon-dioxide-emissions

In catalytic pyrolysis, methane breaks down into hydrogen and carbon over a metal catalyst, which is typically nickel- or iron-based, at temperatures of less than 1,000 °C.
https://www.luxresearchinc.com/blog/technology-landscape-key-players-in-methane-pyrolysis

How much CO2 is generated during the extraction of the natural gas (methane)? How much of the methane is leaked to the atmosphere?
It seems the better path is through the extraction of hydrogen from seawater, of which we have no shortage. https://www.pv-magazine.com/2021/02/04/novel-catalyst-produces-green-hydrogen-from-seawater-via-solar/

Some CO2 is generated if methane is used in the heating process.
Here is a thought. Renewable Natural Gas (RNG) from Agriculture and Solid Municipal Wastes is 50% CO2 which is removed to upgrade it to pipeline quality NG.
If you use this process and CO2 Electrolysis,e.g. Twelve Energy, to make Sustainable Aviation Fuel it would be Carbon Negative.

If you have 1000 deg C heat, you can use a thermo-chemical process to directly convert water to hydrogen and oxygen. One reaction uses sulfuric acid and iodine but but reagents are recycled so the only output is H2 and O2.

I suspect that the UBC thermal methane cracking research is mostly to provide a green wash for the Alberta oil and gas industry.

However, making cheap diamond sounds like a good way to sequester carbon :)

This is like the chemistry version of money laundering