ZeroAvia announced a development collaboration with Alaska Air Group, the parent company of Alaska Airlines, for a hydrogen-electric powertrain capable of flying 76-seat regional aircraft in excess of 500 NM. Alaska is also joining the list of top investors for the company, alongside a fellow Seattle-based Amazon Climate Pledge Fund and Bill Gates’s Breakthrough Energy Ventures.

Alaska and ZeroAvia engineers will work together to scale the company’s existing powertrain platform to produce the ZA2000, an engine family capable of producing between 2,000 and 5,000 kilowatts of power with a 500-mile range. The partnership will initially deploy a 3MW+ hydrogen-electric powertrain system into a full-size De Havilland Q400 aircraft, previously operated by Alaska Air Group subsidiary Horizon Air Industries, Inc., capable of transporting 76 passengers. 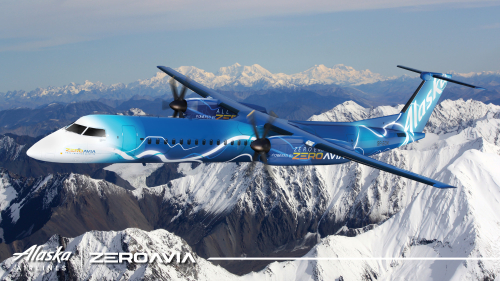 ZeroAvia will also work closely with aircraft regulators during this project to ensure the aircraft meets both safety and operational requirements. ZeroAvia will set up a location in the Seattle area to support this initiative.

Alaska has also secured options for up to 50 kits to begin converting its regional aircraft to hydrogen-electric power through ZeroAvia’s zero-emission powertrain, starting with the Q400 aircraft. This pioneering zero-emission aviation rollout will be supported by the ground fuel production and dispensing infrastructure from ZeroAvia and its infrastructure partners, such as Shell. Working to advance novel propulsion is one of the five parts of Alaska’s strategy to achieve net zero.

Recently, ZeroAvia also successfully ground-tested its 600 kW powertrain capable of flying airframes 10-20 seats in size 500 miles, is well advanced in preparing a 19-seat aircraft for flight testing at Cotswold Airport in the UK and is moving to full-size prototype manufacturing of its 2,000 kW engine for demonstrations in 2022.

Based in the UK and USA, ZeroAvia has already secured experimental certificates for two prototype aircraft from the CAA and FAA, passed significant flight test milestones, and is on track for commercial operations in 2024 for its 600 kW engines, and 2026 for its 2,000-5,000 kW engine platform. The company’s expanding UK operations are supported by grants from UK’s Aerospace Technology Institute and Innovate UK, and ZeroAvia is part of the UK Prime Minister’s Jet Zero Council.

With Shell involved, I am somewhat suspicious about how the hydrogen will be produced. Probably steam reforming with promises to go green at some future date. I think that they are better off just using one of the "sustainable" jet fuels.

If the SMR hydrogen is combined with CCS, at least 85% of the CO2 emission would be captured.

If the Haldor Topsøe eSMR technology were employed to drive the process, nearly 100% of the CO2 can be captured.

CO2 can potentially be sequestered at the bottom of gas fields (not fracking) for enhanced gas recovery.

As a method to avoid CO2 emissions, blue hydrogen can be almost as good as green hydrogen - technically - even though it may seem 'morally inferior'. ;-)

You may be right. However, I am convinced the large energy (oil) companies are biding their time, ready to prowl on the renewable market with their money and petrochemical experience, when the market is ready. I very much those organizations intend to die along the the use of fossil fuels just to prove a point. They're in love with fossil fuel because it has been extremely profitable. And they will remain so until it is no longer the most profitable route.

You really need to look at this:
https://www.youtube.com/watch?v=2EA4tDYwNYo&t=249s

Then you can make up your mind about blue hydrogen.

The graphics on the article are rather confusing and it is geared to HD trucks but the bottom line is that the energy cost of hydrogen fuel cell power is somewhere between 4 and 6 times that of battery electric power even with steam reformation and carbon capture. This is why I think that hydrogen is going to have a hard time in the long term for commercial aviation. It is just economics. Meanwhile, the oil and gas companies would like to keep pumping petroleum as long as possible and will push their blue hydrogen scam as long as possible.

Liquid Hydrogen is the lightest fuel available on an energy per unit mass. Unfortunately, it has all kinds of other problems. It boils at 20 deg C above absolute zero and is very energy expensive to produce. Even as a liquid, it has a very low energy value per unit volume. Just look at the size of the liquid hydrogen fuel tank on the Space Shuttle. Unless you are going to burn off the liquid hydrogen in a few minutes, you need a fancy and somewhat heavy system of insulated tanks. In general, hydrogen is a real pain to work with. It leaks thru everything, messes with the metallurgy of many metals. I would believe that ammonia will be used as a aircraft fuel before hydrogen but that has it own problems and still has a relatively low energy per volume compared with jet fuel.

That must be why companies are pursuing LH2

We will have to see where LH2 goes. Now it is mostly used for upper stage rocket fuel. If it is for aircraft, I would guess that the most likely use would be for hypersonic military aircraft. If you want to use it for longer range commercial aircraft you would need a completely different design to hold the large volume of fuel while having the CG stay in the same place while the fuel burns off. I certainly do not expect to see this in my lifetime but I am old;)