Mitsubishi Motors Corporation (MMC) revealed online the fully redesigned plug-in hybrid electric vehicle (PHEV) model of the Outlander crossover SUV. Sales will commence in Japan on 16 December, followed by Australia and New Zealand in the first half of 2022 and North America in the second half of 2022. 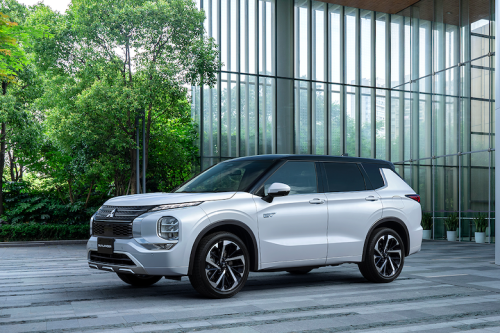 The Outlander was initially released in 2001 as MMC’s first crossover SUV. Since then, it has been rolled out globally over three generations and has become a core model in the company’s lineup, representing approximately 20% of the sales volume. After the PHEV model was added to the previous generation in Japan in 2013, it was sequentially launched in regions including Europe, Oceania, North America and ASEAN, and has become a leader in the PHEV category with around 290,000 total units sold thus far.

The all-new Outlander PHEV model has been given significant upgrades all over, focusing on the following three attributes:

PHEV system. MMC has completely updated the Outlander’s PHEV components, extended its EV driving range and enhanced the acceleration unique to EVs. With an increase of around 40% in the output of the front and rear motors and drive battery, the new model can keep driving in EV mode and avoid starting the engine as much as possible even when pressing hard on the accelerator, delivering the smooth, powerful and satisfying motor-based driving of high-output twin-motor 4WD.

Switching to a 20 kWh drive battery and raising the equivalent all-electric range to 87 kilometers (54 miles) (in WLTC mode) has assured sufficient driving range even when using functions such as the air conditioner, while at the same time helping to reduce the frequency of charging. An increase in the capacity of the gas tank has also expanded the total possible range when combining EV driving with hybrid driving.

Unifying the rear motor with the control unit also secured enough floor space to install a third row of seats, enabling a seven-passenger seating layout. Installing the control unit on the outside of the passenger compartment has also helped to shut out high-frequency noise for superior quietness.

Newly added innovative pedal operation mode makes it possible to both accelerate and decelerate just by controlling the accelerator pedal. The accelerator pedal alone can exert proper braking force with no need to switch to the brake pedal when decelerating, so drivers can concentrate on steering and have more peace of mind in slippery surfaces such as snowy roads, as well as reducing the fatigue caused by switching pedals.

The S-AWC (Super-All Wheel Control) integrated vehicle dynamics control system, based on a twin-motor 4WD system with one drive motor in front and another in the rear, has a new brake AYC (Active Yaw Control) function for the rear wheels.

This allows the system to distribute the driving force to the front and rear wheels optimally according to road and driving conditions, while torque vectoring by controlling the brakes on the left and right wheels is also possible for the front and rear wheels. This makes it possible to extract the maximum performance from all four tires in a more balanced manner, delivering handling true to the driver’s intention and high operating stability.

Seven drive modes can be selected depending on road surface conditions and driving style. Normal is the basic mode, optimized for normal driving on paved roads. Tarmac mode provides brisk acceleration response and high-cornering performance on dry paved surfaces. Gravel mode provides balanced operability and road handling ability on unpaved or wet paved roads, and Snow mode delivers stable vehicle behavior on snowy and other slippery roads. Mud mode optimizes tire slippage according to vehicle speed for superior road handling on muddy roads and deep trenches of snow, while also providing better ability to escape when stuck. Modes that can be used according to driving style are Power mode, which delivers powerful acceleration when needed, and Eco mode which prioritizes economic and environmentally friendly driving.

Incorporated around the passenger compartment, these sheets go beyond the conventional steel sheet reinforcement to form a highly durable passenger compartment with little deformation. Inclusion of the latest version of MMC’s active safety technologies, which detect collision risks with multiple sensors for safer driving, keep collision risks to a minimum while offering safety and peace of mind.

The all-new Outlander is equipped with evolved MI-PILOT single-lane driver assistance technology for highways. The control system integrates Adaptive Cruise Control (ACC) and Lane Keep Assist (LKA) to assist the driver in maintaining distance between vehicles while keeping in the center of the lane. It also detects speed limit signs and automatically adjusts the set speed accordingly. MI-PILOT with Navi-link utilizes map data to automatically adjust vehicle speed as needed according to curves, forks, and other circumstances on expressways. Also, the vehicle can automatically start within about 30 seconds of stopping in traffic, alleviating fatigue on the expressway.

Very good, but is 20 kWh a bit big for a PHEV?
IMO, they should make a 12 kWh version with 30 miles driving to make it cheaper and lighter.
(And if possible, also a 16 kWh for 40 miles, if this was easy to do).
Then, you could size your PHEV battery to your daily usage.
Now that would be something.

@ mahonj:
I sincerely doubt that it is very good. The most widely implemented e-motor is of the radial-flux type of which many different variants are possible. The axial-flux type - also known as "disc" motor, which is being pursued intensively by YASA motors - not only has much higher torque but is also far more efficient than a radial-flux. Additionally, the axial-flux is lighter and easier and cheaper to produce.
It is also a proven fact that it is difficult to depart from former bad habits.