The US Department of Transportation’s National Highway Traffic Safety Administration (NHTSA) released the Early Estimate of Motor Vehicle Traffic Fatalities for the First Half (January-June) of 2021, which shows the largest six-month increase recorded in the Fatality Analysis Reporting System’s history. An estimated 20,160 people died in motor vehicle crashes in the first half of 2021, up 18.4% over 2020—the largest number of projected fatalities in that time period since 2006.

In addition to the traffic fatality data, NHTSA also released behavioral research findings from March 2020 through June 2021, indicating that incidents of speeding and traveling without a seatbelt remain higher than during pre-pandemic times. 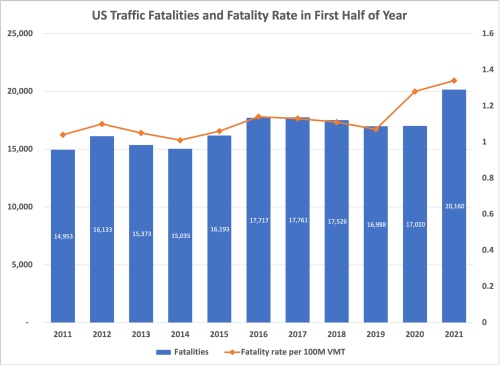 However, the report also shows that the fatality rate in Q2 has declined—the first decline in year-to-year quarterly fatality rate since Q4 of 2019.

USDOT is developing a National Roadway Safety Strategy that is intended to bring together work being done across USDOT and that will put forth a comprehensive set of actions to reduce serious injuries and deaths on the nation’s roadways significantly. The strategy will recognize that, while the Department has an important leadership role to play in addressing this crisis, it will take concerted and coordinated effort across all levels of government, the private sector, and communities to reverse the current trend. The strategy will be released in January.

The strategy will be rooted in the Safe System Approach principles and identifies significant actions the Department will take to help ensure: Safer People, Safer Roads, Safer Vehicles, Safer Speeds, and Post-Crash Care.

Even while the National Roadway Safety Strategy is being prepared, the Federal Highway Administration (FHWA) has accelerated two proven programs focused on highway safety. The Focused Approach to Safety Program has notified 15 states and Puerto Rico—who together account for roughly half of nationwide road fatalities—that they will receive technical assistance resources to address the most common types of crashes that result in fatalities (roadway departures, intersection crashes, and pedestrian/bicycle crashes).

Dunno what is going on in the US, they are down in the UK, and even slightly down per million miles driven.

They were already something like half as high as in the US by miles driven.

Road safety and traffic enforcement needs a serious examination there to figure out why the roads are so lethal.

It is not just the UK which is way lower.

Some of the problem may have to do with increased speed. When the traffic levels went down, the speeds went up and it seems to have stayed up. The Highway Patrol had a sign that read "SPEEDING IS NOT THE NEW NORMAL" but that seems to be wishful thinking. The speed limit on the urban freeways is 70 mph but if you are not going 80, you are being passed.

@sd:
I think you 're right. On most freeways the limit is 65 mph; but if you drive 65, you are viewed as a traffic hazard.

I wonder if "stay at home" policies effected older drivers more than younger drivers. Younger drivers are learning to drive at older ages that the used to so may have less experience. Gone are the days of driving being taught in high school.

If you read other sources you'd know that the additional fatalities are occurring largely in black areas.  The police aren't policing them due to the Floyd effect, so the drivers get wilder and more fatalities result.