According to Benchmark, several of China’s major lithium-ion battery makers have written to customers setting out intentions of new pricing structures, citing the rise in cathode and anode raw material prices as well as higher costs more generally, including for non-active materials such as PVDF binder, foils, and energy.

Lithium carbonate has been singled out as a major driver behind the battery cell price increases. 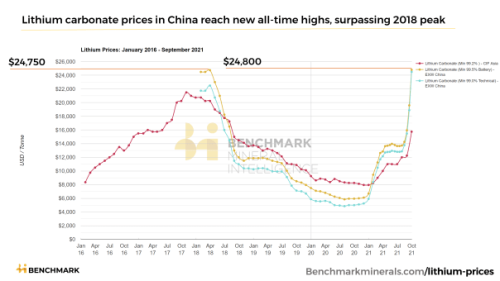 While Benchmark’s EXW China hydroxide price has also seen unprecedented upward movement, rising by 68.4% over Q3 to an average of RMB 157,500/tonne ($24,425), robust demand for LFP chemistry cathodes in China has once again placed carbonate at a historically unusual price premium over hydroxide.