Under the terms of the agreement, Energy Vault agreed to provide 1.6 gigawatt hours (GWh) of gravity energy storage to support DG Fuels across multiple projects, with the first project slated for 500 megawatt hours (MWh) in Louisiana. DG Fuels expects to complete its Louisiana SAF project by mid-2022. This initial project will be followed by additional projects in British Columbia and Ohio.

Energy Vault’s advanced gravity energy storage solutions are based on the proven physics and mechanical engineering fundamentals of pumped hydroelectric energy storage, but replace water with custom-made composite blocks, or “mobile masses”, which do not lose storage capacity over time. The system uses proprietary technology to autonomously orchestrate the lifting and lowering of the bricks, storing the potential energy in the elevation gain, and generating then discharging electricity as the bricks are lowered. 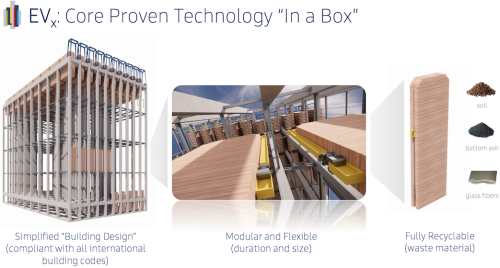 The composite blocks can be made from low-cost and locally sourced materials, including the excavated soil at the construction site, but can also utilize waste materials such as mine tailings, coal combustion residuals (coal ash), and fiberglass from decommissioned wind turbine blades.

Additionally, the Energy Vault systems are intended to minimize environmental and supply chain risks, which was a critical factor in the final selection by DG Fuels. The systems are automated with advanced computer control and machine vision software that orchestrate the charging and discharging cycles while meeting a broad set of storage durations starting from 2 hours and continuing to 12 hours, or more.

DG Fuels (DGF) aims to develop several facilities in North America and Europe, designed to produce low-carbon sustainable aviation fuel by combining carbon from waste feedstock with green hydrogen from renewable sources. The Louisiana facility is the company’s first major project. Each facility will produce low-emissions fuel in a process that converts agricultural and timber waste feedstock into fuel with a carbon efficiency of approximately 93% or more—meaning that the project can produce more fuel with less feedstock than other processes.

DGF’s fuel production system better utilizes biomass feedstock over conventional biomass-to-liquids projects because of DGF’s use of waste CO2 to make additional fuel. Depending on feedstock carbon content, DGF produces up to 3.6 barrels of biogenic blending component per ton of biomass feedstock compared to most other competitors who achieve about 1.1>1.3 barrel per ton of feedstock.

The basis of DGF’s integrated fuel and energy technology is the proven Fischer-Tropsch process, in use for more than 60 years. Existing plants around the world produce more than 170,000 BBL per day of synthetic fuel using Fischer-Tropsch. These facilities typically use approximately one ton of coal to produce one BBL of hydrocarbons, with a life cycle CO2-emissions calculation that is slightly worse than equivalent fuels derived from conventional oil refining.

DGF’s method modifies the established Fischer-Tropsch system with several mechanisms that will decrease the CO2-life-cycle emissions and reduce the quantity of feed-stock required. These changes eliminate the need for carbon sequestration and reduce the system’s feed-stock handling costs and complexity. 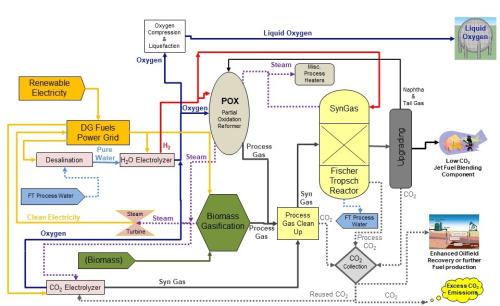 DG Fuels will deploy Energy Vault’s gravity storage systems to provide green electricity in conjunction with photovoltaic solar to firm and shape the renewable energy to match the demand load of the green hydrogen production. The renewable power will be used to power HydrogenPro water electrolysis for both hydrogen and oxygen feedstock production.

Energy Vault expects the agreement with DGF to provide up to $520 million in revenue across the three projects, the first of which expected to commence in mid-2022.

Do we have a cost per MWh ?
Sounds like easier to install than hydro pumped storage.

Wikipedia says "Pumped-storage hydroelectricity (PSH), or pumped hydroelectric energy storage (PHES), is a type of hydroelectric energy storage used by electric power systems for load balancing. ... The round-trip energy efficiency of PSH varies between 70%–80%, with some sources claiming up to 87%." The Energy Vault website just says the is has "higher round trip efficiency" than large scale pumped hydro storage". Could they use dead lithium ion batteries as their weights?

I've wondered why wind turbines don't have such a system in or on their towers. Having to deal with such strong lateral loads, it seems that they would be over designed for vertical loads. It might even assist in stabilizing the towers.

IEEE Spectrum had an overview article in 2020-01 about the various dry/mechanical gravity energy storage solutions. This one appears to have higher capital costs, due to the building, vs. say, mine shaft (where available) and other approaches.

It's not clear if EVault has any sort of lock on the the market, as the basic concept seems to be public domain, unless they are bringing some unique advantages in terms of mechanical efficiency, life-cycle or input:output algorithms.

There are even proposals to use pull-down&raise tethered balloon systems (which is fine until some airplane strays into the wires).

This reminds me of the idea to use electric locomotives pulling fully-loaded freight cars up and down hills, but the power levels are tiny:  just a few megawatts apiece.

Lifting a metric ton up 1 kilometer stores about 9.8 megajoules, just under 2.75 kWh.  Storing 1.6 GWh means a lift of over 800,000 ton-km of hoisting, and most places you're not going to be able to achieve a Δh anything close to a kilometer without digging deep tunnels (which gets expensive).  I don't see how these people expect to make this idea work.

The loading was quite automated. They had the tare weight of each car (just under 50,000 lbs) preloaded in the computer and measured the weight of each carload of coal before dumping it in the car so they could keep it just under the max gross weight. The train was loaded at a continuous speed of about 0.5 mph.

Anyway, I agree that gravity energy storage is probably not going to find wide scale use.

33,500 m tonnes of CO2
If you put that in a CAES system we can store renewable energy

Here is a good article on CAES economics
https://caes.pnnl.gov/pdf/PNNL-22235.pdf