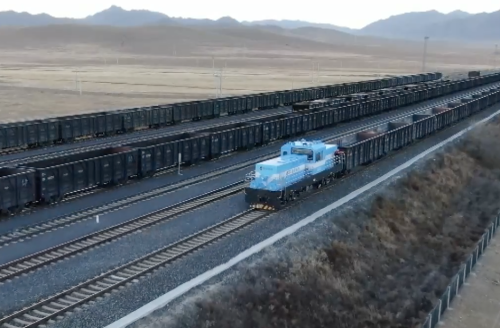 Relying on its own railway, SPIC Inner Mongolia took the lead in putting the locomotive into application, realizing a closed loop from domestic R&D to application.

Li Lingtao, deputy chief engineer with CRRC Datong Co., Ltd., said that the hydrogen fuel cell hybrid locomotive has a design speed of 80 km/h. It can run with 700 kW of continuous power for 24.5 hours when fully loaded with fuel and its maximum traction load on straight roads reaches 5,000 tonnes.

The next step will be to develop jointly a 2000 kW hydrogen fuel cell hybrid locomotive suitable for broader railway industry applications.

And the color of the hydrogen is? My first guess would be brown or coal based but maybe grey. Certainly not green.

You really are determined to find any excuse to downplay hydrogen.

I have no idea what the current source of the hydrogen is, as they don't say, which of course has not stopped you claiming that it is 'certainly' not green.

However, since it is situated in Inner Mongolia, that is where vast amounts of energy from renewables are in something of a traffic jam getting them to the big population centers in the East.

If they are not currently using green hydrogen, its location in a renewables rich area of China where they build the most economical electrolyzers means that it is an excellent candidate for some of the earliest cost competitive hydrogen rail transport using green hydrogen.

If it isn't green (or blue) H2, then it is a bit of a cod.
We should also allow a few years to get there, but otherwise it smells of greenwashing; a bit like burning coal with the intention of adding CSS "at some time" (i.e. never).

The new-energy locomotive is expected to cut carbon emissions by about 96,000 tonnes a year running on the coal railway linking the Baiyinhua coal mine in Inner Mongolia with the port of Jinzhou in northeast China’s Liaoning Province.
So it’s purpose is to haul coal. However, they are moving in the right direction.
The State Power Investment Corporation Limited (SPIC) already has 50% of their 179 GW of installed capacity in clean generation (Solar, Wind, Hydro, and Nuclear) and moving to 75% in 2035. http://eng.spic.com.cn/2021/sustainability/sustainabilityreport/202107/P020210714614244189546.pdf
They also have these SPIC “Magic Cube” Series which are 34 types of battery-swap heavy-duty trucks and construction machinery products.
The other partner CRRC Datong Co., Ltd manufactures a variety of electric freight locomotives and this H2 Hybrid locomotive probably is designed for export. https://www.chinadaily.com.cn/a/202101/28/WS601221a3a31024ad0baa5b44.html
The hydrogen does look green at least in the long run.
https://www.argusmedia.com/en/news/2246287-chinas-inner-mongolia-targets-green-hydrogen-expansion

Its beyond weird how unless every link in the low carbon hydrogen production chain, which has only just come into existence at all, is dismissed unless every stage is working right now, fully economically and at volume.

There is not a technology in existence which managed that, they all took time to ramp up.

The news is that there is nothing in the IPCC reports to indicate that decarbonisation is possible at all without massive recourse to decarbonised hydrogen production and/or carbon sequestration.

Criticism is one thing, but the lack of balance and reason is beyond all rationality.

From your SPIC link what caught my eye is that they reckon that they have got Fe-Cr flow batteries working, ready to ramp to large scale:

' As one of the most promising energy storage technologies, Fe-Cr redox flow battery can improve grid stability and is the optimal energy storage technology with renewable energy sources. Besides, the cost will be as low as that of pumped storage after produced at scale. SPIC has developed 2kW, 10kW, 30kW and 250kW energy storage product series, and realized localization in all the components. Ronghe One, the 31.25kW Fe-Cr redox flow battery stack independently developed by
SPIC, boasts the maximum power output of its kind around the globe' (pg 27)

Cheap enough efficient enough storage to cover the 1-10 day window is our next big goal, now that solar, wind and electrolyzers for hydrogen for seasonal storage are getting to the right kind of level.

If they are right and they have cracked it then this is big.

Link to Fe-Cr and other flow battery technologies:

I absolutely believe that there is a place for hydrogen and especially green hydrogen. There is no way to produce some chemicals especially ammonia without hydrogen. Maybe it will help in producing clean steel but we will have to see if Boston Metals can come on line with their direct electrolysis of molten iron ore which will take far less energy. I will state that is good to do basic research work on any number of projects involving hydrogen and fuel cells.

However, when they tell me how much CO2 they are going to save when hauling coal that produces about 3 tons of CO2 for every ton of coal burned, it certainly smacks of green washing. If they are using the locomotive to haul coal, they obviously to do have excess power to make hydrogen.

But it seems a lot of the judgements going around don't make much or any allowances for early days.

It's a huge irony.

Here are hydrogen fuel cell trucks for the steel industry:

Presumably that is all negative too, and no good can come of it.