In Q1, the US Department of Energy (DOE) Alternative Fueling Station Locator reached the milestone of 100,000 public electric vehicle supply equipment (EVSE) ports. All types of EVSE ports grew, except for public Level 1 EVSE ports, which decreased by 2.4%.

Overall, there was a 7.3% increase in the number of EVSE ports in the Station Locator, with Level 2 EVSE ports contributing to the majority of that growth.

In Q1, the Biden administration announced the American Jobs Plan, which aims to build a national public charging network of 500,000 EVSE ports by 2030. Using this figure as a benchmark, the United States has installed 20.2% of those EVSE ports as of Q1.

NREL’s 2017 National Plug-In Electric Vehicle Infrastructure Analysis estimated how much public and workplace charging infrastructure would be required in the United States to meet charging needs for a central scenario in which 15 million light-duty plug-in electric vehicles (PEVs) are on the road by 2030 (601,000 Level 2 and 27,500 DC fast EVSE ports).

However, the majority (56.7%) of public DC fast EVSE ports in the Station Locator are on the Tesla network and are therefore only readily accessible to Tesla drivers. 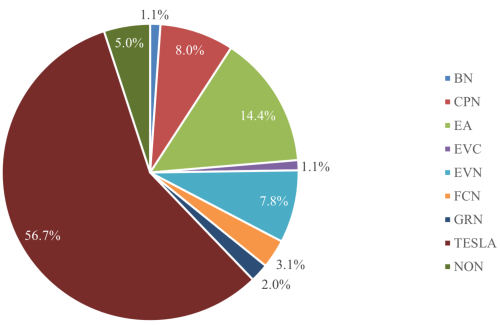