The US Environmental Protection Agency (EPA) is proposing comprehensive new regulations to reduce methane emissions from the oil and natural gas industry—including, for the first time, reductions from existing sources nationwide. 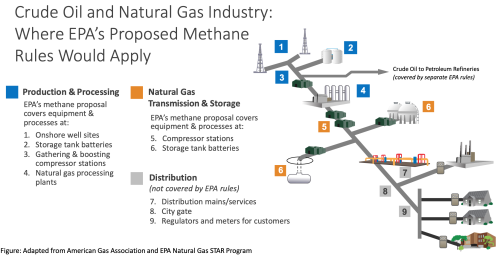 Methane is a potent greenhouse gas that traps about 30 times as much heat as carbon dioxide over 100 years. In the United States, the oil and natural gas industry is the largest industrial source of methane emissions, emitting more methane than the total emissions of all greenhouse gases from 164 countries combined. Oil and natural gas operations also emit smog-forming volatile organic compounds (VOCs) and toxic air pollutants such as benzene that harm public health.

The proposed rule would reduce 41 million tons of methane emissions from 2023 to 2035—the equivalent of 920 million metric tons of carbon dioxide, or more than the amount of carbon dioxide emitted from all US passenger cars and commercial aircraft in 2019. In 2030 alone, the rule would reduce methane emissions from sources covered in the proposal by 74% compared to 2005.

EPA’s Regulatory Impact Analysis estimates the value of cumulative net climate benefits from the proposed rule, after taking into account the costs of compliance as well as savings from recovered natural gas, is $48 to $49 billion from 2023 to 2035—the equivalent of about $4.5 billion a year. The climate benefits are estimated using the social cost of greenhouse gases and represent the monetary value of avoided climate damages associated with a decrease in emissions of a greenhouse gas. In addition to these benefits, EPA estimates that from 2023 to 2035, the proposal would reduce VOC emissions by 12 million tons and hazardous air pollution by 480,000 tons.

It would accomplish this through:

Key features of the proposed rule include:

EPA also is requesting information on additional sources of methane for the Agency to consider in developing a supplemental proposal to reduce emissions even further. In addition, EPA is taking comment on how to structure a community monitoring program that would empower the public to detect and report large emission events for appropriate follow-up by owners and operators for possible further development in a supplemental proposal. EPA intends to issue the supplemental proposal in 2022, and to issue a final rule before the end of 2022.

EPA will take comment on the proposed rule for 60 days after it is published in the Federal Register.