The hydrogen-powered fuel cell is a promising propulsion concept on the way to emission-free flying and an integral part of MTU’s Clean Air Engine (Claire) technology agenda. Safety is a top priority in aviation, which is why entirely new standards, approval regulations and verification procedures must be defined for the safe operation of the new propulsion concept of the flying fuel cell.

When it comes to the approval of a flying fuel cell, all parties involved are entering uncharted territory, which is why we are seeking dialog with the certification bodies at such an early stage.

In this way, Frank says, MTU is underscoring its pioneering role in this new technology.

We rely on a strong network of partnerships and research collaborations. Together with EASA, we are breaking new ground for a sustainable orientation of aviation.

MTU Aero Engines aims to advance a promising future option for zero-emission aviation with the flying fuel cell. Together with the German Aerospace Center DLR, the engine manufacturer is developing and validating a fuel cell powertrain. A Do228 aircraft will serve as a technology platform and flight demonstrator, equipped and tested in the coming years with a hydrogen-powered fuel cell and a single-sided electric propeller drive. 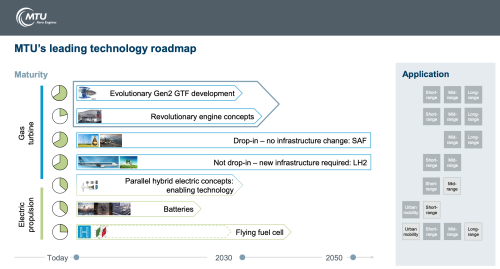 MTU Aero’s technology roadmap for lower emissions aviation has two main objectives. The first is to refine its Geared Turbofan with revolutionary propulsion concepts—e.g., the water-enhanced turbofan (WET), which uses “wet” combustion to cut NOx emissions and reduce contrails. The second is to electrify the powertrain as far as possible, e.g., with the flying fuel cell.

I give up. I can understand why would adding water would cut NOx emissions but why would it cut down on contrails? I would think that it would enhance contrails.

Contrails or condensation trails compound Global Warming trapping heat (“ How Airplane Contrails Are Helping Make the Planet Warmer”, https://e360.yale.edu/features/how-airplane-contrails-are-helping-make-the-planet-warmer.
MTU water-enhanced turbofan (WET) using ”wet” combustion is actually a composite cycle engine concept using a steam injected gas turbine (STIG) cycle aka Cheng Cycle, that integrates a steam power process into the gas turbine processes to feed the heat of the exhaust stream back into the process inside the engine.
Watch this video on “Potentials of the Water-Enhanced Turbofan (WET)” - https://www.youtube.com/watch?v=OttrOK7v7Xg - that shows the aircraft mounted condenser and water recovery system.

The 2050 timeframe is the goal of all aviation companies to accommodate 70% growth in passengers by 2050 while reducing net carbon emissions levels from just over 30 million tonnes of CO2 per year down to zero.
https://www.sustainableaviation.co.uk/goals/climate-change/
These goals relate more to using Sustainable Aviation fuels to replace current fuels.
On the hardware side, MTU is pursuing two approaches that go far beyond conventional technologies: the composite cycle engine concept that combines a gas turbine with a free piston compressor and engine, and the steam injected gas turbine (STIG) cycle concept.
I prefer the STIG concept because it is already developed for round based power generation and has >50% thermal efficiencies. The drawback is that a condenser must be built into the airframe.
Could a waste heat recovery system based on Reaction Engines technology reduce the size of the Condenser? (Reference; https://reactiontechnologies.co.uk/utilising-waste-heat-with-supercritical-co2/)

Should say: Ground based power generation Not “round based.”

This MTU video goes into more detail about the timelines.
“ What does the future engine look like?”
https://www.youtube.com/watch?v=j6XCoK5jBRs