Southwest Research Institute (SwRI) has developed an intrusion detection and defense system (IDS) to protect military ground vehicles against cyberthreats to embedded systems and connected vehicle networks. While developed for military vehicles, the system can also be used to scan for anomalies in passenger cars and commercial vehicles.

The CAN protocol, for example, informs a dashboard display when a sensor detects low oil pressure or when headlights have been activated. It also relays operational communications for systems such as the transmission and other critical automotive technology.

A cyberattack could potentially send erroneous information across the CAN protocol to alter or impede a vehicle’s operations. An attack on several connected vehicles could have disastrous effects.

—Jonathan Wolford, co-author of a paper on the subject

Since 1986, CAN has been a standard automotive protocol, providing a reliable and flexible platform to transmit information. However, it was not designed with cybersecurity protections. As modern vehicles become increasingly connected via external networks, the CAN system is increasingly vulnerable to potential cyberattacks, particularly from bad actors sending false messages.

CAN was designed for reliability and flexibility to perform in a wide range of applications rather than for security. Security from cyberattacks was of little concern during the development of CAN in 1986. Other than a checksum, CAN buses do not provide integrity or authentication verification for transmitted data, meaning that any node on the bus can transmit a message to any other node and the receiver cannot verify the sender or if a given CAN packet is unaltered. Over time, as vehicle connectivity increases, the lack of security in CAN bus networks presents an increasingly serious problem that needs to be addressed. Commercial and military ground vehicles alike are vulnerable to cyber threats.

GVSC and SwRI created a solution to this problem by using digital fingerprinting to monitor physical layer characteristics, combined with application layer monitoring to identify anomalous messages on the bus. Once anomalies are identified, these messages are removed through bus segmentation. The physical and application layer detection algorithms, along with bus segmentation, make up the automotive intrusion defense system (IDS). 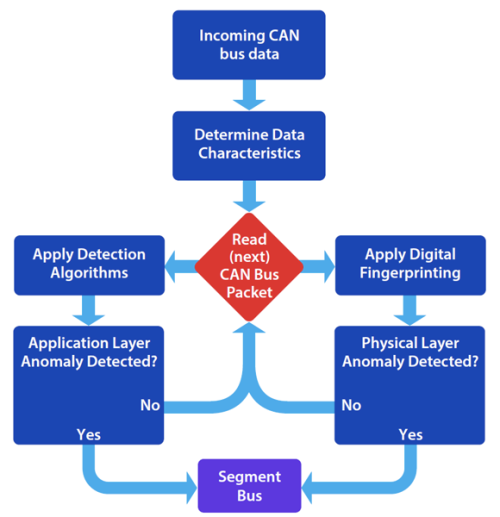 SwRI’s new algorithms digitally fingerprint messages on nodes that transmit information via the CAN bus protocol. Digital fingerprinting allows SwRI’s intrusion detection systems to identify when an unknown/invalid node or computer is connected to the vehicle network.

These algorithms use the CAN transceiver’s message transmission to track low-level physical layer characteristics—such as the minimum and maximum voltages as well as the voltage transition rates for each CAN frame—to create these digital fingerprints.

The researchers trained the system with baseline data to build a fingerprint of each node, to understand characteristics and better identify anomalies. With digital fingerprinting, the intrusion system accurately identifies messages sent from unauthorized nodes or when a valid node is sending spurious messages, indicative of a “masquerade attack.”

After training the system, SwRI engineers injected false data, and the algorithms flagged them instantly. The system is capable of both identifying threats and defending against them.

These attacks are theoretically easier for bad actors who have physical access to a vehicle, but vehicles are also vulnerable from wireless attacks. Our system is designed to build cyber resiliency into the CAN protocol as we move to more connected and automated vehicle networks.Peter Moldenhauer, co-author