The decarbonization of EU road transportation will increasingly impact the demand for fossil and biofuel, especially after 2030. The long-term outlook for biofuels, beyond 2045, does not look promising, as the expected decline in demand is likely to encourage biofuel companies to look for alternative uses for their products, according to a new research report from Rabobank.

The path toward decarbonization in road transportation in the EU will require a multifaceted approach that, besides traditional biofuels, also includes the use of renewable electricity, green hydrogen, and other advanced biofuels. This, along with regulations banning the sale of internal combustion engine cars by 2035, will slowly replace the vehicle fleet and negatively impact the demand for fossil fuel and biofuel as early as 2025, with a bigger impact after 2030, the report says. 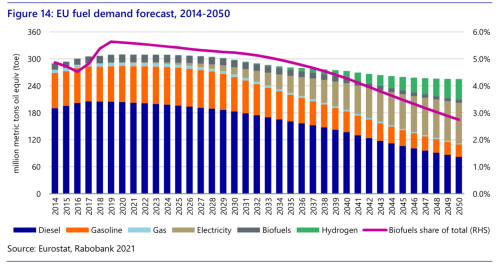 In line with global efforts to cap global warming at 1.5°C to 2°C, the EU aims to become climate-neutral while achieving net-zero GHG emissions by 2050. On 14 July, the European Commission proposed a package plan, ‘Fit for 55,’ to reduce gas emissions to at least 55% by 2030 when compared to 1990.

Decarbonization of car fleet to impact biodiesel and bioethanol demand. The pathway to decarbonization in the EU is geared toward the electrification of the car fleet, and the use of renewable or green hydrogen in heavy and commercial vehicles. Renewable sources of energy in transport contribute to reducing greenhouse gas emissions and fossil-fuel dependence.

Electrification and hydrogen adoption in road transport will have a negative impact on the demand for fossil and biofuels, especially after 2030. In the short-term until 2025, given the higher replacement rate of diesel vehicles, Rabobank forecasts that diesel and biodiesel demand will decline at the same rate of almost 4% from 2020 levels.

On the other hand, gasoline and bioethanol demand is expected to grow by 5% until 2025, as the replacement rate of gasoline motor vehicles will take longer to have an impact.

A steeper decline will show in the years that follow, as new technologies start to replace the old vehicle fleet.

The declining demand for biodiesel will not translate to the same extent into a declining demand for its feedstocks. The phasing out of palm oil in EU biofuel production through 2030 is likely to spur a competition between rapeseed oil and used cooking oil to fill the gap. The growth in ethanol demand until 2025 should benefit most ethanol players and their feedstocks. Its decline thereafter would impact feedstocks at a similar rate except for cellulosic ethanol, which should be incentivized to grow as it is considered advanced biofuel.

The future for traditional biofuels is discouraging. The long-term outlook, beyond 2045, does not look good. By then, most of the EU vehicle fleet will already have been replaced with electric and hydrogen vehicles. The expected decline in biofuels demand is likely to encourage biofuel companies to look for alternative uses for their products.

According to Afonso, unless policies change to allow these biofuels to be used directly as fuel, it is unlikely that there will be additional investments to expand capacity of conventional biofuels even with the positive short-term outlook, and considering that there is existing idle capacity available.

Rabobank is a Dutch multinational banking and financial services company.

Left out of this study is the transition of biofuels to Sustainable Aviation Fuel which will start having some impact after 2025, though expanding capacity will probably not be needed.