BorgWarner will be providing a new, high-voltage silicon carbide (SiC) inverter to a large German automaker for implementation in its next-generation electric vehicles. This award expands existing 400V inverter business with this German OEM by adding 800V technology. 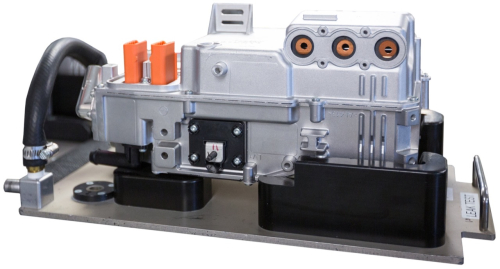 The SiC inverter uses a scalable power switch for 800V systems, allowing it to be optimized for a variety of customer applications at different power levels. The SiC design builds on BorgWarner's proven cooling technology that enables a reduced semiconductor area for cost-effectiveness.

Additionally, the system offers greater durability and enhanced packaging due to its compact, patented power switch that is cooled on both sides and uses no wire bonds. The silicon IGBTs in the modular power switch have been replaced by SiC transistors. Because SiC has higher switching efficiency and fewer conduction losses, BorgWarner’s new SiC inverter has reduced power losses of 40% to 70% as compared to silicon-based based inverters, depending on the drive cycle.

Other inverter wins. Separately, BorgWarner has also logged a several other wins recently for its inverter family.

As part of its Charging Forward initiative, BorgWarner is accelerating the company’s electrification strategy and has announced plans to grow electric vehicle revenues to approximately 45% by 2030, along with a commitment to achieve carbon neutrality by 2035.