The price of US benchmark West Texas Intermediate (WTI) crude oil is near its highest level since 2014, increasing rapidly from low prices in mid-2020 as demand returns faster than supply, according to the US Energy Information Administration (EIA).

Because of the economic effects, government and business responses, and personal travel changes caused by the COVID-19 pandemic in 2020, demand for crude oil and petroleum products declined rapidly, inventories increased, and prices fell. 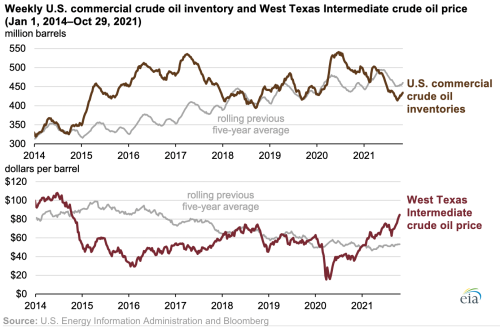 This year, demand for petroleum—both in the United States and globally—has largely returned to the pre-pandemic levels in 2019. Demand has grown faster than supply, reducing inventories and contributing to higher prices for crude oil and petroleum products. The price for WTI reached $84 per barrel on 1 November, up $37/b since the beginning of the year. Likewise, the price of Europe's crude oil benchmark, Brent, rose $34/b over the same period, reaching $85/b on 1 November.

Refineries use crude oil as a feedstock to produce petroleum products. Refineries have increased operations (increasing their demand for crude oil) at a faster rate than US crude oil production has increased this year, contributing to the decline in US crude oil inventories. US crude oil inputs have nearly returned to the 2019 level for this time of year, despite several refinery closures since 2020.