Daimler Truck AG and TotalEnergies signed an agreement on their joint commitment to the de-carbonization of the road freight in the European Union. The partners will collaborate in the development of ecosystems for heavy-duty trucks running on hydrogen, with the intent to demonstrate the attractiveness and effectiveness of trucking powered by clean hydrogen and the ambition to play a lead role in kickstarting the rollout of hydrogen infrastructure for transportation. 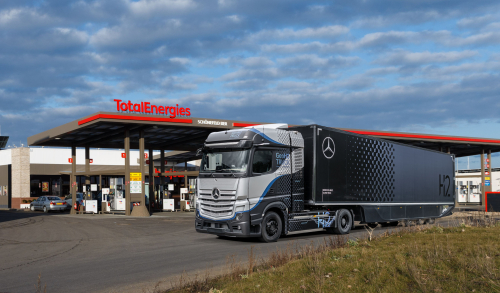 The collaboration includes hydrogen sourcing and logistics, dispensing of hydrogen in service stations, development of hydrogen-based trucks, establishment of a customer base as well as other areas.

In particular, TotalEnergies has the ambition by 2030 to operate directly or indirectly up to 150 hydrogen refueling stations in Germany, the Netherlands, Belgium, Luxemburg and France.

As part of the collaboration, Daimler Truck is also to supply hydrogen-powered fuel-cell trucks to its customers in the Netherlands, Belgium, Luxemburg and France by 2025. The truck manufacturer will support its customers to ensure easy operability and highly competitive uptime.

In order to develop these projects and to establish hydrogen-based transportation as a viable option, both companies want to jointly investigate the means of reducing the Total Cost of Ownership (TCO) of hydrogen truck operations, in line with their common approach to work together with authorities on the regulatory framework in the European Union.

Daimler Truck and TotalEnergies are both members of the H2Accelerate consortium. The two companies remain fully committed to working with the consortium, a key vehicle to support the rollout of hydrogen-powered transport in Europe in the coming decade.

Daimler Truck has the ambition to offer only new vehicles that are CO2-neutral in driving operation (“from tank to wheel”) in Europe, North America and Japan by 2039. The company is focused on both CO2-neutral technologies: batteries and hydrogen fuel-cells. Currently, the truck manufacturer is testing a new enhanced prototype of its Mercedes-Benz GenH2 Truck on public roads in Germany. The first series-produced GenH2 Truck are expected to be handed over to customers starting in 2027.

Daimler Truck has a clear preference for liquid hydrogen. In this state, the energy carrier has a far higher energy density in relation to volume than gaseous hydrogen. As a result, the tanks of a fuel-cell truck using liquid hydrogen are much smaller and, due to the lower pressure, significantly lighter. This gives the trucks more cargo space and a higher payload. At the same time, more hydrogen can be carried, which significantly increases the trucks’ range. This will make the series version of the GenH2 Truck, like conventional diesel trucks, suitable for multi-day, difficult-to-plan long-haul transport and where the daily energy output is high.

TotalEnergies is a global multi-energy company that produces and markets energies on a global scale: oil and biofuels, natural gas and green gases, renewables and electricity. TotalEnergies is looking into the production of clean hydrogen—blue or green—produced using carbon-neutral processes, from natural gas with carbon capture and storage or based on intermittent renewable electricity.

For several years, the Company has been working on the development of concrete use cases for the decarbonization of industrial processes as well as in mobility and gas.

There's only one way enough hydrogen can be produced to handle a huge fleet of H2 trucks and that's using fossil fuel feedstock; this is exactly what the oil companies had in mind when they introduced the idea at the turn of the century. The problem is the hydrogen is produced by steam reforming which is very inefficient and a gross polluting process. Some call it 'Gasoline 2.'