US targeting net-zero aviation by 2050; heavy focus on SAF

At COP26 in Glasgow, US Transportation Secretary Pete Buttigieg announced the US Aviation Climate Action Plan, published by the US Federal Aviation Administration (FAA), which sets out to achieve net-zero greenhouse gas emissions from the US aviation sector by 2050.

The document focuses on technologies that could substantially reduce the emissions from the commercial fleet of aircraft. As such, it does not focus on the use of electricity nor hydrogen, which could be used in small, short-haul aircraft. While the electrification of these aircraft would only have a small impact on GHG emissions, the use of electrification as a means to power general aviation could have considerable air quality benefits as many small, short-haul aircraft are powered by leaded aviation gasoline. 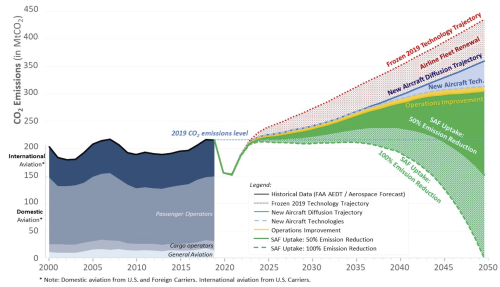 Key initiatives in the plan include:

The announcement follows the Sustainable Aviation Fuels Grand Challenge, a government-wide initiative designed to catalyze the production of at least three billion gallons per year by 2030. Earlier this year, the FAA announced more than $100 million in matching grants to increase aircraft efficiency, reduce noise and aircraft emissions, and develop and implement new software to reduce taxi delays.

The agency has also invested more than $300 million to electrify airport equipment and solicitation to find a sustainable air traffic control tower. This builds on provisions in the bipartisan infrastructure legislation, including investments in electric vehicles and public transit, that will further address carbon emissions in the transportation sector.