A research team at the University of Wisconsin–Madison has identified a new way to convert ammonia to nitrogen gas through a process that could be a step toward ammonia replacing carbon-based fuels. The discovery of this technique, which uses a metal catalyst and releases—rather than requires—energy, was reported in Nature Chemistry and has received a provisional patent from the Wisconsin Alumni Research Foundation.

The electrochemical conversion of ammonia to dinitrogen in a direct ammonia fuel cell (DAFC) is a necessary technology for the realization of a nitrogen economy. Previous efforts to catalyse this reaction with molecular complexes required the addition of exogenous oxidizing reagents or application of potentials greater than the thermodynamic potential for the oxygen reduction reaction—the cathodic process of a DAFC. We report a stable metal–metal bonded diruthenium complex that spontaneously produces dinitrogen from ammonia under ambient conditions. The resulting reduced diruthenium material can be reoxidized with oxygen for subsequent reactions with ammonia, demonstrating its ability to spontaneously promote both half-reactions necessary for a DAFC. 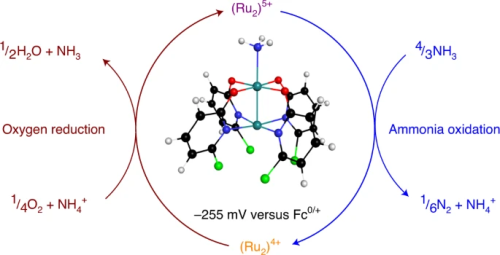 The scientists found that the addition of ammonia to a metal catalyst containing the ruthenium spontaneously produced nitrogen; no added energy was required. This process can be harnessed to produce electricity, with protons and nitrogen gas as byproducts. In addition, the metal complex can be recycled through exposure to oxygen and used repeatedly.

We figured out that, not only are we making nitrogen, we are making it under conditions that are completely unprecedented. To be able to complete the ammonia-to-nitrogen reaction under ambient conditions—and get energy—is a pretty big deal.

Ammonia has been burned as a fuel source for many years. During World War II, it was used in automobiles, and scientists today are considering ways to burn it in engines as a replacement for gasoline, particularly in the maritime industry. However, burning ammonia releases toxic nitrogen oxide gases.

The new reaction avoids those toxic byproducts. If the reaction were housed in a fuel cell where ammonia and ruthenium react at an electrode surface, it could cleanly produce electricity without the need for a catalytic converter.

For a fuel cell, we want an electrical output, not input. We discovered chemical compounds that catalyze the conversion of ammonia to nitrogen at room temperature, without any applied voltage or added chemicals. This is the first process, as far as we know, to do that.

We have an established infrastructure for distribution of ammonia, which is already mass produced from nitrogen and hydrogen in the Haber-Bosch process. This technology could enable a carbon-free fuel economy, but it’s one half of the puzzle. One of the drawbacks of ammonia synthesis is that the hydrogen we use to make ammonia comes from natural gas and fossil fuels.

This is changing, however, as ammonia producers attempt to produce “green” ammonia, in which the hydrogen atoms are supplied by carbon-neutral water electrolysis instead of the energy-intensive Haber-Bosch process.

As the ammonia synthesis challenges are met, according to Berry, there will be many benefits to using ammonia as a common energy source or fuel. It’s compressible, like propane, easy to transport and easy to store. Though some ammonia fuel cells already exist, they, unlike this new process, require added energy, for example, by first splitting ammonia into nitrogen and hydrogen.

The group’s next steps include figuring out how to engineer a fuel cell that takes advantage of the new discovery and considering environmentally friendly ways to create the needed starting materials.

This work was supported by the US Department of Energy (DOE).

I am taken aback if not daily, then regularly, by fundamental changes in the underpinings of energy production.

As Hoagy Carmichael wrote in the song:
'How little we know'

This is a radically new process, undermining previous assumptions.

Amazing. I could see this type of Fuel Cell really catching on. Especially if using electrolysis to produce our own ammonia.

Not a good substitute because of the toxicity
.

So apparently if there are any issues at all posing the need to properly manage them, then whole vast areas of technology should simply be ruled out 'on first principles'

Unfortunately that includes batteries and for instance solar panels, so you seem to have ruled out everything.

You make no sense at all.

Ammonia is an important part of life. If you have a very high protein diet, ammonia levels in your blood could have a harmful increase (Did you know that the Blue Zone Centenarians, e.g. in Barbagia region of Sardinia have a low protein diet.)
The understanding of the Nitrogen Cycle could lead to interesting discoveries in the 21st Century. While 78% of the air we breathe is Nitrogen, there is a much smaller percent in the earth crust. Nitrogen is a key element in protein, fertilizer, and many natural processes. It can also be very energetic, e.g. rocket fuel and explosives.

This could lead to game change zero emission NH3 fueled long range electric aircraft.
Although the HHV of NH3 is about half of hydrocarbon fuels (Ref 1), the current best overall efficiency of turbofans is about 50% (Ref 2). So if a NH3 fuel cell can be made light and compact enough for aviation and have near 100% efficiency, with a full electric configuration, the overall fuel weight becomes almost equal.
Much easier to redesign, with some insulation in fuel tanks, fuel cell electric fan engines.
Ref's
1. https://www.frontiersin.org/about/about-frontiers
2. https://web.mit.edu/16.unified/www/SPRING/propulsion/UnifiedPropulsion3/UnifiedPropulsion3.htm