To accelerate market adoption of hydrogen in aviation, Universal Hydrogen is developing a conversion kit to retrofit existing regional airplanes—starting with the ATR72 and the De Havilland Canada Dash-8—to hydrogen power. 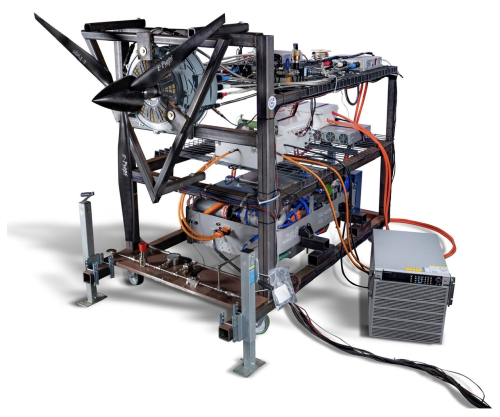 The conversion consists of a fuel cell electric powertrain that replaces the existing turboprop engines. It also accommodates, in the rear of the fuselage, UH’s proprietary, lightweight, modular hydrogen capsules that are transported from green hydrogen production sites to the airport and loaded directly into the aircraft using the existing intermodal freight network and cargo handling equipment. 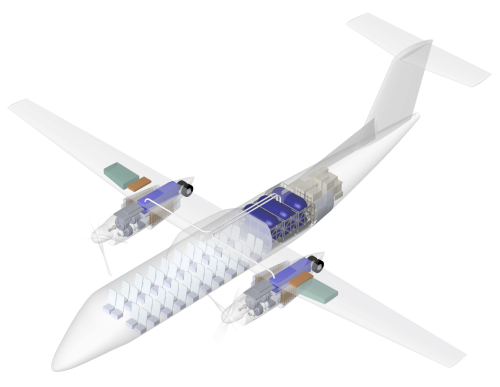 Green hydrogen is a zero-pollution aviation fuel and is also the most weight-efficient energy carrier available, aside from nuclear fuels—with nearly four times more energy per unit of mass than traditional jet fuel.

Under a Memorandum of Understanding (MOU) signed by the two, FFI and Universal Hydrogen have agreed to:

Critics will rightly note that this entails a considerable reduction in load space.

We simply don't yet have technologies as yet to answer every criticism, however this will enable the establishment and development of supply chains.

And some increase in costs should in my view be accepted, as decarbonisation is more important than the convenience of cheap unlimited air travel.

Aviation fuel is not even currently taxed in most places, and rises in business light aircraft travel are projected to lead to a substantial increase in CO2 out to 2050.

This is an excellent field to insist on decarbonisation in my view, as it hits most severely those best able to afford it, and should be leading edge with high standards insisted on.

I think that the problem is going to be cost per seat-mile. Green hydrogen or even "blue" hydrogen is quite expensive unless you can possibly use a high temperature gas cooled nuclear reactor with a direct thermal chemical reaction instead of electrolysis but that is at least a decade away. Hydrogen also come a host of other problems.

Personally, I think that the "magic chemistry" lithium sulfur batteries will take over the short haul flights just based on economics. I would note that Bye Aerospace is predicting that their 8-seat airplane with a 500 nm range will cost 1/4 of what a current turboprop costs to operate on a seat-mile basis. Eviation is supposed to have the initial flight of their 9-passenger 440 nm range electric aircraft using lithium ion batteries this year but I expect that this will slip into next year but they are close to having a flying prototype. They are also predicting initial commercial freight operations in 2024 but I would not be surprised if this slips some.

Long haul will be with so-called sustainable aircraft fuels or SAF or maybe green ammonia but that will also be expensive unless the cost of hydrogen comes way down.

Look at another design that doesn't involve taking away seats nor lengthening of the fuselage, and doesn't involve fuel cells, but just use the gas turbine engines that come with the airliners. It would use Liquid H2 (LH2). The LH2 fuel tank is insulated with 1-2-inch-thick Polyurethane foam that weighs almost nothing:
The LH2-fueled Airliner Boeing 787-9
You have to design a LH2 plane with a clean-sheet approach in order to appreciate the lightness of LH2. Keep in mind that the latest jet engines are far more fuel -efficient than the low-bypass engines of several decades ago.
Look in Wikipedia for the specs of the Boeing 787-9:
Max Takeoff Wt (MTOW): 560,500 lbs with a max fuel load of 223,378 lbs. This means that the fuel weight is almost HALF of the MTOW, with Max payload of 116,000 lbs only, with range of 7,635 nmi.

Now, with LH2 weighing a third that of jet fuel and methane per BTU, your fuel load will be only 74,000 lbs, giving you additional 148,000 lbs of pay load on top of the 116,000 lb payload, we can increase the pay load almost 2.5 times. But we can't, because we don't have the room for additional passengers. Instead, we can design the plane with smaller wings, tails, engines, landing gears to accommodate a much lower takeoff weight (MTOW). So, we will design the plane with smaller wings and tail planes, smaller engines, and smaller landing gears...and these components weigh about ~ 2/3 the empty weight of the plane. The weight of the empty 787-9 is around 221,000 lbs, and 2/3 of this weight would be 147,000 lbs. Take this and divided by 2 ( due to 50%- reduction in MTOW) = 73,000 lbs.

Passenger floor of this plane would take space 1/2 way up the height of the fuselage, thus taking up only 1/2 of the total internal space of the fuselage, which is around 600 M^3, giving space of almost 600 M^3 underneath the seating floor for fuel and cargo, of which, the LH2 fuel only takes up around 240 M^3 of space, giving the remaining space for cargo. Entirely doable even without resorting to a blended-wing-fuselage unconventional design!

And I haven't touched the additional efficiency advantage of using cryogenic fuel, which is the ability to pre-cool the intake air into the core turbine engine, to reduce compression work to further increase engine's power output to further reduce engine weight and increase engine efficiency. We would expect engine thermal efficiency to jump from 50% to 60% as the result of intake air pre-cooling with super-cold cryogenic fuels, with a corresponding further saving of 20% of fuel weight and a modest saving in engine weight as well, due to the downsizing of the core-turbine engine.

I would like to further emphasize the following:
1.. There will be NO weight penalty of pressure vessel because there will be NO pressure vessel required for storing LH2 at atmospheric pressure. Simply the pressurization to atmospheric pressure is sufficient.
2.. Insulation is featherweight polyurethane foam that also doubles as structural component, firewall...no additional weight penalty
3.. NO fuel cell, no power cables, no motors will be used...Will use gas turbines with pre-cooled intake to reduce the size of the compressor in order to reduce the overall weight of the engine. The gas turbine will be LIGHTER and 20% more fuel efficient due to intake air pre-cooling!
4.. There is no need for a bigger hull because the lower floor of the 787-9 is big enough to carry BOTH the LH2 fuel AND cargo.
5... IF 21% more internal space will be needed to carry low-density cargo, the hull can be widened by 10%, with minimal impact on surface drag due to an overall surface drag gain of only under 5% for the entire aircraft...rather than the use of a double hull which result is much higher surface area gain. But, that is only in the case that more volume will be needed to carry low-density cargo.

Now that you have completed the design of the next generation long range LH2 aircraft maybe you can use your engineering and technology skills to develop the technology needed to make low cost LH2 so that it can compete in the world market.

My personal conviction is that OPEC and the oil processing industry (big oil) even more so, will do everything possible to survive. Presently, the more threatening possibility is oil deterrence and not oil depletion. An almost perfect substitute for an oil industry is a hydrogen industry; a great part of the existing oil infrastructure can be used for a H2 economy. That would lower investment expenditures and subsequently increase profits. A good deal for big oil.
The real truth about H2 is all too often avoided. First of all, the production efficiency is lousy to say the least. Employing H2 as a fuel in a combustion engine results in high emissions of nitrous gases (Nox). A high temperature fuel cell is prone to the same results. A high temperature turbine is absolutely not different. It is generally claimed that a fuel cell, operating on the principle of cold combustion, avoids such emissions. I'm not really convinced that this is true, when considering all the lies and half truths that have been spread about fuel cells. A fuel cell cannot be operated without a battery. The battery can be smaller than one in a BEV but it is vital to the operation of a fuel cell. What advantage does a fuel cell driven vehicle offer in comparison to a BEV? I am certain, none. But I'll leave that to everyone's imagination.
Almost forgot to mention one advantage, it saves the skin of big oil and keeps users in the dependence of big oil.

@sd,
The techs for low-cost green LH2 already exist. One just have to put all of them together. With raw electricity price for PV panels at the solar farm at 2 cents per kWh and 50 kWh per kg of H2, the raw cost of energy will be only 100 cents per kg of H2. Adding electrolyzer cost and it would be around 150 cents per kg. This H2 can be flowed using existing NG pipeline system to near the airports where the H2 can be liquefied into LH2. At the cost of electricity at 5 cents per kWh at the airport and 10 kWh of energy to make 1 kg of LH2, the total cost will be 100 cents. Adding profit and we can obtain wholesale price of LH2 at $3.00 at the airport pumps.

By comparison, the current price of JetA in North America is $2.27 per gallon, but LH2 planes has TWICE the fuel efficiency per kg of payload-mile as JetA , and yet LH2 only costs $3.00 per kg, thus we will actually save energy cost when taking the green LH2 route.