NREL: adoption of shared micromobility in US could save 2.3B gasoline-equivalent gallons per year

High adoption of shared micromobility in the US coud save 2.3 billion gasoline-equivalent gallons per year nationwide, according to a new study by a team at the National Renewable Energy Laboratory (NREL). The paper is published in Transportation Research Part D: Transport and Environment.

Travel demand data at the national and city level were analyzed to identify trips that can be served through micromobility, and scenarios with varying levels of micromobility adoption were evaluated. Results show that peak adoption of shared micromobility can reduce energy consumption from reported passenger travel by 1% at the national level and 2.6% at the city level, with micromobility-induced transit trips identified as the largest contributor for energy reduction.

Sensitivity analysis was carried out to show how the energy impacts would change with various levels of key micromobility-related parameters, and results show distance threshold having a stronger influence on the energy impacts, compared to redistribution energy intensity.

E-bikes and seated scooters, which typically have longer trip distances, were the modes responsible for the greatest savings. 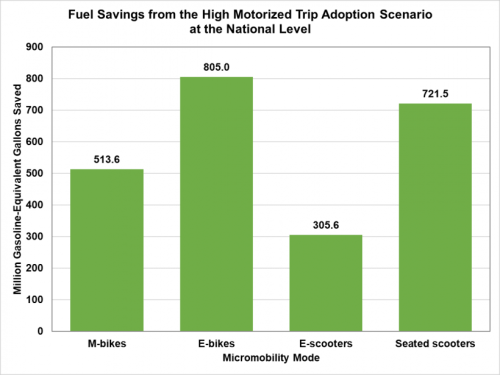