Both vehicles are equipped with a 30kW fuel cell that will be assembled in France. Vehicle, e-motor and hydrogen integration are also made in France. Both vehicles will be available in 2022 with green hydrogen production and distribution solutions.

Renault Master Chassis Cab H2-TECH is revealed at Solutrans from 16 to 20 November (Eurexpo Lyon, France). This vehicle allows a range of about 250 km and offers great potential for tailor-made conversions. The box van with its 19 m3 is the first release convenient for large transport of goods and packages up to 1,000kg of payload.

Renault Master City Bus H2-TECH is presented for the first time at the Salon des Maires from 16 to 18 November (Porte de Versailles, Paris, France). This urban minibus can carry up to 15 passengers, with a range of about 300 km. It is suited for businesses, municipalities, and local public services.

Master City Bus H2-TECH is equipped with the 30kW fuel cell, a 33kWh battery and a tank containing 4.5kg of hydrogen at 350 bars 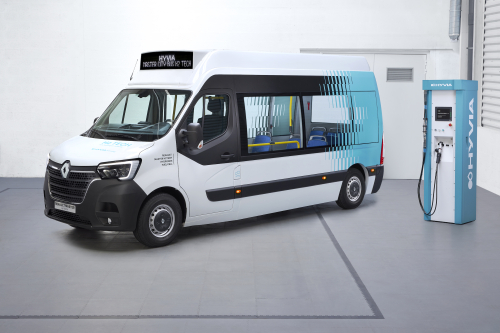 HYVIA is moving fast. After less than six months of existence, we unveiled three Hydrogen Light Commercial Vehicles: a Van, a Chassis Cab and a City Bus. To meet different usages, for professional fleets or territories. We also revealed our Hydrogen Refueling Station, to offer customer refueling options where hydrogen infrastructure is still in development. HYVIA is about concrete solutions to be on track to meet the challenges of green hydrogen mobility and decarbonization of transport.

In 2022, HYVIA will deploy its full ecosystem:

Renault Master is produced at Batilly plant in France. Electric and hydrogen integration is realized by PVI, a Renault Group subsidiary in Gretz-Armainvilliers. The drive motor is produced at Cleon plant. Fuel cell assembly and Hydrogen Refueling Station will begin at Flins plant.