Wholesale used vehicle prices (on a mix-, mileage-, and seasonally adjusted basis) increased 4.9% in the first 15 days of November compared to the month of October, according to Cox Automotive. This brought the Manheim Used Vehicle Value Index to 234.8, a 44.9% increase from November 2020.

As was the case in October, some of the monthly increase is a result of the seasonal adjustment, as November typically sees above-average vehicle depreciation and therefore used price declines. The non-adjusted price increase through mid-November was 2.6%, Cox said. 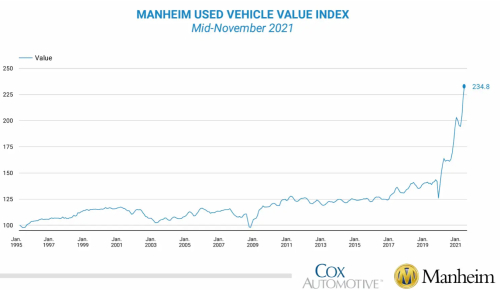 Manheim Market Report (MMR) prices increased over the first two full weeks of November at a decelerating pace. The Three-Year-Old MMR Index, which represents the largest model year cohort at auction, experienced a 1.9% cumulative increase over the last two weeks.

Over the first 15 days of November, MMR Retention, which is the average difference in price relative to current MMR, averaged 101%, which indicates that valuation models are not keeping pace with the increase in market prices. The average daily sales conversion rate of 65.2% in the first half of November declined relative to October’s average of 66.6% but remains elevated for this time of year. The latest trends in the key indicators suggest wholesale used vehicle values will likely see smaller gains in the second half of the month.

On a year-over-year basis, all major market segments saw seasonally adjusted price gains through the first 15 days of November. Pickups had the smallest year-over-year gains, vans had the largest at 59.6%, and both non-luxury car segments outpaced the overall industry in seasonally adjusted price growth. Compared to October, midsize cars had the smallest growth in the first half of November, while vans had the largest gain. 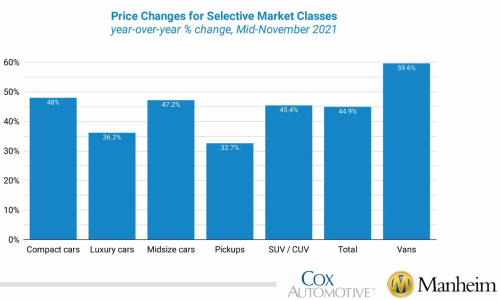 Even with loan performance normalizing, auto credit access expanded in October. The Dealertrack Auto Credit Availability Index measured auto credit as looser in October compared to February 2020 before the pandemic began for all types of loans and all types of lenders.