Rolls-Royce said that its all-electric Spirit of Innovation aircraft has set three new world speed records, making it the world’s fastest all-electric aircraft. The company has submitted data to the Fédération Aéronautique Internationale (FAI)— the World Air Sports Federation which controls and certifies world aeronautical and astronautical records—that at 15:45 (GMT) on 16 November 2021, the aircraft reached a top speed of 555.9 km/h (345.4 mph) over 3 kilometers, smashing the existing record by 213.04 km/h (132mph). 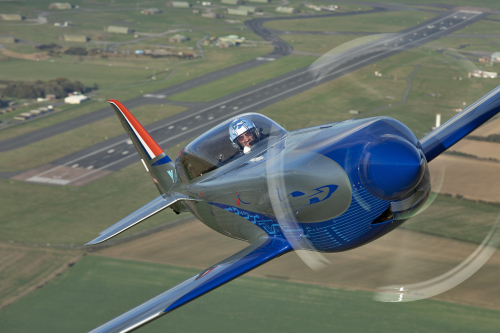 In further runs at the UK Ministry of Defense’s Boscombe Down experimental aircraft testing site, the aircraft achieved 532.1km/h (330 mph) over 15 kilometers—292.8km/h (182mph) faster than the previous record—and broke the fastest time to climb to 3000 meters by 60 seconds with a time of 202 seconds. Rolls-Royce is looking to the the FAI to certify and officially confirm the achievements of the team in the near future. 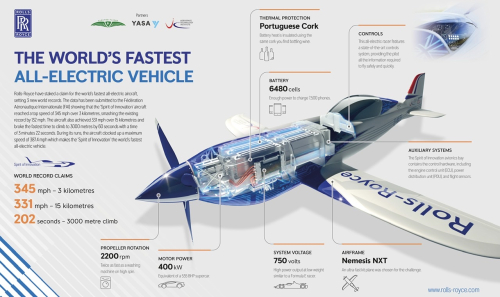 During its record-breaking runs, the aircraft clocked up a maximum speed of 623 km/h (387.4 mph)—making the Spirit of Innovation the world’s fastest all-electric vehicle, the company said.

Staking the claim for the all-electric world-speed record is a fantastic achievement for the ACCEL team and Rolls-Royce. I would like to thank our partners and especially Electroflight for their collaboration in achieving this pioneering breakthrough. The advanced battery and propulsion technology developed for this program has exciting applications for the Advanced Air Mobility market. Following the world’s focus on the need for action at COP26, this is another milestone that will help make ‘jet zero’ a reality and supports our ambitions to deliver the technology breakthroughs society needs to decarbonize transport across air, land and sea. 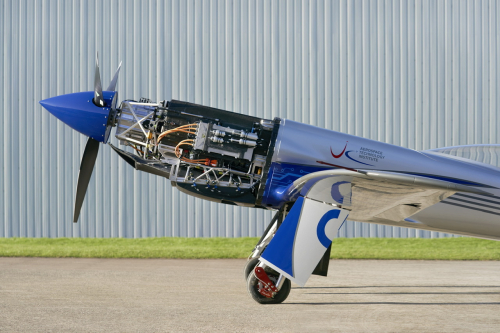 The Spirit of Innovation is part of the ACCEL (Accelerating the Electrification of Flight) project. Half of the project’s funding is provided by the Aerospace Technology Institute (ATI), in partnership with the Department for Business, Energy & Industrial Strategy and Innovate UK.

The aircraft was propelled on its record-breaking runs by a 400kW (500+hp) electric powertrain and the most power-dense propulsion battery pack ever assembled for aerospace application. Rolls-Royce worked in partnership with aviation energy storage specialist Electroflight and automotive powertrain supplier YASA.

As well as a stunning technical achievement, the project and world record runs provided important data for future electric power and propulsion systems for all-electric urban air mobility and hybrid-electric commuter aircraft. The characteristics that air-taxis require from batteries, for example, are very similar to what was developed for the Spirit of Innovation, the company said.

Rolls-Royce has a history of flying speed record attempts and breaking records, dating back to the Schneider Trophies of the early 1930s. The speed achieved by test pilot and Rolls-Royce Director of Flight Operations Phill O’Dell in the Spirit of Innovation was more than 213.04 km/h (132 mph) faster than the previous record set by the Siemens eAircraft powered Extra 330 LE Aerobatic aircraft in 2017. Never in the history of the FAI record attempts has there been such a significant increase in speed over such a short time, highlighting the rapid pace at which electrification of aerospace is advancing, Rolls-Royce said. 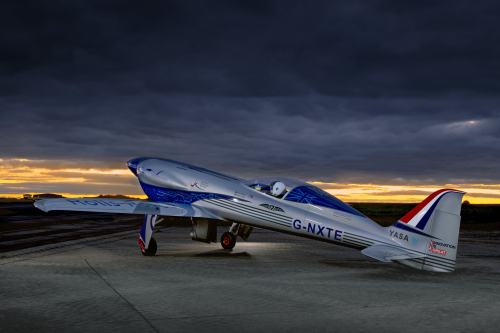 Electric flight is set to be as transformative for mobility as the jet engine was 70 years ago. It’s thrilling to see our ultra-high performance, super-low weight electric motors powering the Spirit of Innovation to these great speeds, and to know that collaborative projects like ACCEL take us one step closer to emissions-free electric flight becoming a commercial reality for all.

The ACCEL program has also been supported by Jaguar Land Rover, which loaned all-electric zero emission Jaguar I-PACE cars as towing and support vehicles, and Bremont, the luxury watchmaker and official timing partner for the record attempt.

The aircraft took off from the MoD’s Boscombe Down site, which is managed by QinetiQ and flew profiles according to the FAI guidelines for record attempts in the Powered Aeroplane C-1C Electric class. Test Pilot, Electroflight Steve Jones flew the Spirit of Innovation aircraft for the 15km and the time to climb to 3000 meters record runs that have been submitted.

The problem is distance and payload at speed, not just absolute speed.
Electric power is easy; the problem is lightweight and compact electrical energy storage.

A bit grinchy in time for Christmas! :-)

The land speed records for cars were not for regular production cars either, but contributed to their development.

There are plenty of opportunities to demonstrate range, and payload etc in other records.

Get distance with LH2

Nice for the perf and the buzz but useless.

Alright, I might have had my grumpy hat on a bit tight, but I stand by my comments.
Furthermore: "Electric flight is set to be as transformative for mobility as the jet engine was 70 years ago." is clearly "a bit of an exaggeration".
Anyway, it is a start.

What we need is a power system for aircraft that will not cause warming, either by co2 or contrails and has "useful" levels of performance.

While the motor might be part of it (though you really need 5-20x power), current batteries aren't.
Unless you want to do little hops across fjords or to Islands.
(but you'll still have a charging time problem).

Fuel cells, maybe, not sure about the weight and volume of them per kw. There is a huge push behind hydrogen so that might be something (as Nh3 maybe ?)

I find myself in the somewhat odd position that I can at least partially agree with both mahonj and Davemart. This was primarily a publicity stunt by Rolls Royce but and also a way to show that they are looking at the clean electric future of flight. It is not a practical aircraft for anything other than racing just as Formula One cars are not very practical for running out the market for bread and milk. The Nemesis NXT airframe was originally designed for a class of air racing. Work definitely needs to be done on batteries and energy storage for practical electric aircraft. However, the 9 passenger Eviation Alice from Israel and the US is supposed to have a range of 440 nautical miles (815 km) with a cruise speed of 250 knots (287 mph or 463 km/hr -- why can't we all get along and just use SI units) with existing lithium ion batteries. It is supposed to fly this year but that only leaves about 6 weeks. Bye Aerospace also has their 2-place plane flying with existing lithium ion batteries. The plane is supposed to have a range or 220 nm (250 miles) at 96 knots (110 mph) with a 30 minute VFR reserve. I am not sure what will be used for electric long range flight, but whatever it is, it will be a while in the future.

14 CFR § 91.167 endurance & divert-to-alt capability: not soon,
if we're waiting for battery energy density to catch up

Here is an account of another attempt at a speed record:

' "My heart was quaking when the slight trouble arose at the commencement, for I felt I should have to make another start. The engine, however, behaved perfectly, and before I entered the mile it was making about 2,500 revolutions. I cannot possibly describe what I felt when I realised that at any rate I had secured the record. This waiting and waiting has been like a nightmare. I am convinced that if I can get a longer start Bluebird can even surpass the 180 miles an hour which I set out for."

"What is it like to be travelling at such a speed?" I asked him.

"Oh, perfectly exhilarating, and with none of the feelings of danger which some people seem to imagine it possesses," replied Captain Campbell. "There is very little difference between racing at 150 miles and 185 miles an hour. I had perfect control of the car and knew exactly what I should do in the case of an emergency. The wind, of course, is like a hurricane. It is one continuous howl completely drowning every other sound, even that of the great engine of the car. Oh yes, motor racing is as thrilling as any sport I know of and one does not trouble very much about the risk."'

Perhaps building engines about to do 2,500 rpm was equally insignificant in advancing engines for everyday transport? ;-)

As always I'll focus on what is conspicuously absent from the article, and absent from the discussion and EV reporting in general : yes - I'm yet again breaking the deafening supercap silence. An especially bizarre omission given that in 2018 Rolls Royce plc announced a widely reported tie-up with Britain's potentially most disruptive next-gen(energy-dense) supercapacitor R&D team at Cambridge and Surrey-based Superdielectrics Ltd(links below). Superdielectrics have stated that their hydrophilic polymer-based supercaps "could potentially achieve 50-500 times the energy density of li-ion batteries". And that theoretical potential was independently comfirmed by UK's leading nanoscientist Prof David Fermin. Supercapacitors also of course have far greater power-density/delivery than batteries, can be recharged almost instantly at least half a million times, contain no lithium, nickel or cobalt and can function perfectly in extreme cold/hot conditions(typically -45C to +65C).
Note that supercaps are initially intended to complement not replace batteries).
Links RR-refresher:
1) https://www.rolls-royce.com/media/press-releases.aspx
2) Superdielectrics Ltd Y'tube'd presentation containing that pretty sensational "potentially 50-500 times the energy density of Li-ion" assertion(jump to 32' 55")
https://youtu.be/NeCkTrXmNso
Paul G (Editor: EVUK - since...1999)

Hi Paul,
Interesting article on the supercaps and interesting video.
We don't seem to have heard too much since 2018 - or am I missing something ?
Interesting that they say that supercaps self discharge in days (compared to weeks for LiIon and months for petrol), and about Chinese supercap buses getting stuck in traffic jams.
Also, they are realistic about the need for a supercap buffer battery at charging stations.
How safe are supercaps if they get damaged - + do the larger ones generate a lot of heat while self discharging?

Somehow the 50-500 times the energy density of li-ion batteries does not pass the smell test although they did preface it with potential. Anyway, from watching the video, all they were powering for a short time was a small fan and an LED. If you look at the Wikipedia article on supercapacitors, about the best in energy storage is the so-called hybrid lithium-ion supercap and it has less than 10% of energy storage of a lithium-ion battery. They are much more power dense but power and energy are not the same. They also have a much better charge-discharge life.

I mostly trust Wikipedia as it is continuously updated and corrected.

If this was anywhere near what they are claiming, the range problems with electric cars and aircraft would be solved. This reminds me cold-fusion except that cold-fusion at least had some energy possibility as it involved fusion but, of course, it was just a case of poor measurements.