Mangrove Lithium, the developer of a platform for the cost-effective production of battery-grade lithium hydroxide and carbonate from diverse input streams and assets, closed a $10-million Series A investment round led by Breakthrough Energy Ventures (BEV) with participation from existing investor BDC Capital’s Cleantech Practice (BDC). The company will use the investment to build its first operational, commercial-scale plant with the intention of expanding lithium refining capacity in the Western Hemisphere.

Benchmark Mineral Intelligence forecasts a global supply gap of 4.3 million tons of lithium carbonate and lithium hydroxide by 2040. The supply of high-purity, battery grade lithium will be critical to the rapid adoption of electric vehicles (EV). 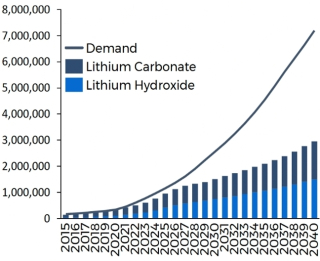 Mangrove has developed a feedstock-flexible, modular platform to produce battery-grade lithium hydroxide and lithium carbonate. It does so cost-effectively by using brines, hard-rock, clays, and battery recycling streams to address this supply gap. Mangrove says its electrochemical process recovers greater than 90% of the lithium from lithium concentrates, with less than 6,000 kWh/ton Lithium hydroxide monohydrate. In addition to eliminating CapEx traditionally associated with conventional refining methods, Mangrove’s technology has the potential to reduce OpEx by as much as 40% in lithium hydroxide production from brines.

Mangrove’s technology solves a huge constraint in electrifying the world’s vehicle fleet by enabling the lowest-cost, highest-purity lithium hydroxide—at a scale of hundreds of millions of vehicles—and can be applied throughout the supply chain.

Mangrove’s platform can integrate with upstream lithium producers, vertically integrate lithium refining alongside battery manufacturing, or act as a versatile independent refinery. All of these contribute to a more resilient and distributed supply chain.

Mangrove intends to work with different companies throughout the lithium and battery supply chains to produce battery-grade lithium hydroxide and lithium carbonate at commercial scale to meet growing demand.