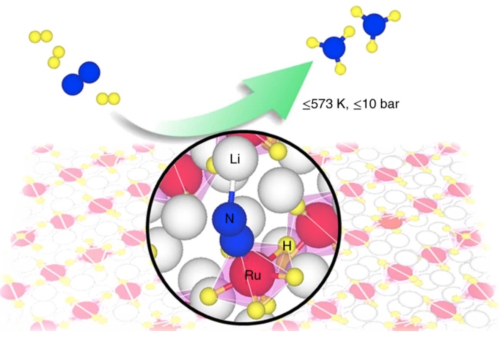 The production of ammonia amounts to about 200 megatons per year. This makes it the second-most produced chemical in the world, surpassed only by sulfuric acid. There are several means of producing ammonia, but the Haber-Bosch process remains the most prevalent, accounting for about 90% of total production. Haber-Bosch and the other processes involved in industrial-scale production require high temperatures (more than 400°C) and high pressure (more than 150 bar). Those conditions are needed to break the strong bonds in nitrogen and react with hydrogen to form ammonia (NH3).

These processes, taking up around 1% of global energy consumption, are largely fossil fuel-based. Hence, ammonia is the most greenhouse gas-intensive chemical-making reaction globally, totalling roughly 1.5% of total global CO2 emissions. In addition, demand for ammonia is only expected to increase in the coming years—mainly due to its use in synthetic fertilizers needed to feed an increasing global population, although it is also being considered as a marine fuel.

One of the major challenges on the climate front, and the energy and food front, is the production of ammonia. Today it is made in some of the largest factories in the world. The only really efficient way to make ammonia is under high temperatures and high pressure and using a carbon-based feedstock. Nature is very good at making ammonia at ambient pressure and temperatures in enzymes like nitrogenase. However, the process is very slow and impossible to scale to industrial production.

—co-corresponding author Professor Tejs Vegge, DTU Energy and the VILLUM Center for the Science for Sustainable Fuels and Chemicals (V-Sustain)

Professor Vegge led the research along with Professor Ping Chen from the Dalian Institute of Chemical Physics (DICP), Chinese Academy of Sciences.

Together with the team from DICP, Tejs Vegge and his colleagues from DTU, Dr Jaysree Pan and Associate Professor Heine A. Hansen, have introduced a new class of complex metal hydride catalysts that enable mild-condition ammonia synthesis.

Conventional heterogeneous catalysts based on metallic iron or ruthenium mediate dinitrogen dissociation and hydrogenation through a relatively energy-expensive pathway. Here we report the ternary ruthenium complex hydrides Li4RuH6 and Ba2RuH6 as an alternative class of catalysts, composed of electron- and hydrogen-rich [RuH6] anionic centres, for non-dissociative dinitrogen reduction, where hydridic hydrogen transports electrons and protons between the centres, and the Li/Ba cations stabilize NxHy (x = 0–2, y = 0–3) intermediates. The dynamic and synergistic involvement of all the components of the ternary complex hydrides facilitates an associative reaction mechanism with a narrow energy span and perfectly balanced kinetic barriers for the multistep process, leading to ammonia production from N2 + H2 with superior kinetics under mild conditions.

Their process allows them to synthesize ammonia at temperatures as low as 300 °C (573 K) and at pressures as low as 1 bar. Practical application of these catalysts shows promise concerning small-scale production of ammonia based on renewable energy. Such systems would generally require catalysts operating under pressures around 50 bar and temperatures below 400 °C.

We believe our research stands out in that this new class of catalysts actually lies somewhere between the biological and the industrial processes. It has something from the human, artificial process—heterogeneous catalysis—and something from what goes on in enzymatic and homogenous catalysis. It is an entirely new way of making ammonia, and we’re using the best of both worlds allowing us to lower the temperature and pressure significantly.

The reduction of nitrogen is realized via multiple ruthenium hydride complexes, [RuH6]4-, which are rich in electrons and hydrogen. The hydrogen transports electrons and protons between the centre and the nitrogen. At the same time, the alkaline metals lithium or barium (Li/Ba) stabilize the reaction intermediates. However, the process is highly dynamic; several parts of the complex also serve other functions. The calculations alone have taken years to complete.

Everything is different from what we’ve seen before. For example, although ruthenium is a well-known component in ammonia catalysis, it is present in a different form and behaves differently. It is surrounded by hydrogen atoms and forms a hydride complex, allowing it to transfer hydrogen in a novel way. You could picture this catalyst as a symphony orchestra, where every part has to function together to make it work. The fascinating part is that it does work – there are no false notes.

Ammonia catalysis is arguably the best-studied catalytic system in the world. To find a truly new mechanism that opens a door into a new world is very satisfying as a scientist. However, it may also open up new possibilities for ammonia production to take place in a less energy-intensive way. The large factories of today are needed to make the production profitable. Our catalysts or similar concepts may enable production in smaller, decentralized factories. This would also cut down on transport, which adds substantially to the price and CO2 emissions of ammonia today.