Home About Contact RSS GCC Twitter Newsletter
WinGD says its engines will be able to run on methanol from 2024 and ammonia from 2025
Ford’s next-gen Ranger pickup gets bigger, adds V6 turbodiesel

In the US, diesel freight trains emit 35 million metric tons of CO2 annually and produce air pollution that leads to $6.5 billion in health costs, resulting in an estimated 1,000 premature deaths each year.

Now, researchers from the US Department of Energy’s Lawrence Berkeley National Laboratory (Berkeley Lab), collaborating with UCLA and UC Berkeley researchers, suggest that the US can retrofit diesel-electric trains with batteries in a way that is cost-competitive with diesel. An open-access paper on their study appears in the journal Nature Energy.

Improved battery technology plus access to cheap renewable electricity open the possibility of battery-electric rail. Here we show that a 241-km range can be achieved using a single standard boxcar equipped with a 14-MWh battery and inverter, while consuming half the energy consumed by diesel trains. At near-future battery prices, battery-electric trains can achieve parity with diesel-electric trains if environmental costs are included or if rail companies can access wholesale electricity prices and achieve 40% use of fast-charging infrastructure. Accounting for reduced criteria air pollutants and CO2 emissions, switching to battery-electric propulsion would save the US freight rail sector US$94 billion over 20 years.

According to the Federal Railroad Administration, 28% of US freight is moved around the country by rail, and that percentage is expected to grow substantially in the next couple of decades. At the recent 2021 United Nations Climate Change Conference, the US joined a dozen other countries in signing onto new agreements to curtail shipping emissions, and zero-emissions solutions for freight rail transport will be part of that commitment.

Unlike several other regions in the world, all freight trains in the US are still diesel-electric, largely because the typical electrification strategy of building electrified lines over tracks is harder to implement in the US with its vast distances. In diesel-electric trains, a diesel engine is connected to an alternator that then supplies electricity to electric motors connected to the locomotive axles. Retrofitting the trains to be powered by batteries is therefore feasible because diesel-electric trains already have an electric motor. 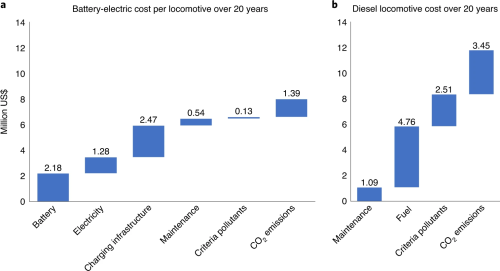 TCO of locomotives by propulsion technology over 20 years for the average US Class I line-haul freight locomotive. (a) Depiction of the TCO for battery-electric propulsion. (b) Depiction of the TCO for diesel propulsion. Both technologies are estimated using a 9.1-MWh battery with a 241-km range for a 3.3-MW locomotive pulling 1,090 revenue-tonnes. Assumptions include: US$0.61 l–1 diesel price, US$100 kWh–1 battery price (US$50 kWh–1 replacement price), 30% station use rate and 3% discount rate. Environmental damages are estimated using the ReEDs model for the US electricity mix under the CES90 scenario for battery-electric. Diesel damages are estimated under the assumption of continued roll-out of the EPA Tier 4 rule. The social cost of carbon emissions starts at US$125 t–1 in 2021 and increases to US$226 t–1 by 2040. Popovich et al.

Dramatic improvements in battery technology, coupled with the existing electric drivetrain in predominantly diesel-electric freight trains in the US, pave the way for a rapid conversion to battery-electric freight rail and with substantial cost savings. Also, the weight of batteries is less of a constraint than it would be for electric vehicles or trucks. We can add a car to a freight train built out with batteries, and the weight of that battery car is not an issue with trains.

Our analysis shows that a switch to battery-electric freight will cut the industry’s annual carbon dioxide emission by more than half, eliminating more than 400 million metric tons of carbon dioxide in 20 years.

The study highlights that additional pathways to electrifying US freight trains exist, such as electrifying trains via overhead power lines or using hydrogen fuel cells in conjunction with battery-powered trains. However, based on the fact that freight trains are already diesel-electric, and considering recent advances in battery technology, the researchers show that the battery-electric pathway offers the most cost-effective, long-term solution with multiple added benefits.

A battery-powered freight train would use half the energy required by a diesel-electric train, and taking into account falling battery prices and environmental costs of diesel, battery-electric trains are on track to be more cost-competitive than diesel-electric trains. Since freight rail planning is centralized, the study suggests that railroads could achieve high volume use of fast-charging infrastructure, which would further reduce costs.

One major benefit of retrofitting existing diesel-electric freight trains with battery tender cars is that the battery-electric trains can always fall back on the diesel engine as a backup fuel source. This dual-fuel capability, allowing for either battery or diesel usage, is a unique advantage compared to fully electrifying the freight rail system or using hydrogen fuel cells.

Another major benefit is that battery-electric trains could be deployed as clean backup power, thus bolstering the electric grid’s resilience. Historically, diesel-electric trains have been used as power generators during emergencies. In early 1998, a series of ice storms left over a million without power in the northeastern US and in parts of Canada. In one suburb of Montreal, the mayor moved an entire diesel-electric locomotive close to City Hall to supply power for their emergency response operations.

Battery-electric trains have the potential to be deployed nationwide to avoid blackouts. These modular, battery tender cars can be transported to where they are needed and charged in locations where the electricity prices are low, thus offering significant advantages over grid-scale storage, the researchers suggest. Moreover, the battery tender cars could work as modular shipping containers, capable of exchange between freight rail and maritime shipping vessels, with positive benefits to decarbonizing both sectors and expanding the resilience reach.

Conversion of the US freight rail sector to battery-electric would generate about 220 gigawatt-hours of mobile storage. Furthermore, these battery tender cars could be deployed during extreme events, such as during the recent catastrophic wildfires in California or the 2021 winter storm in Texas that left millions without access to electricity. This mobile energy storage capability would also create a potential new revenue stream for freight rail operators.

From a technical perspective, the researchers demonstrated that there should not be any constraints in moving to fully battery-electric freight trains, but further research and large-scale demonstration projects are needed to optimize charging infrastructure.

The research was supported by the William and Flora Hewlett Foundation, by way of the Berkeley Lab Foundation.

hybrid battery electric ammonia fueled for long routes. If WinGD can do it by 2025, so can trains.

This is a good concept, however, maybe a simple approach would be to capture the CO2 like that proposed by EFPL (“Capturing CO2 from trucks and reducing their emissions by 90%“, https://actu.epfl.ch/news/capturing-co2-from-trucks-and-reducing-their-emiss/). Another reference: https://www.greencarcongress.com/2019/12/20191226-epfl.html.
A tender car could be used for the CO2 storage and offloaded as required.

The railroads have run LNG and may be doing so again as the price of diesel goes up. RNG is a non starter as there is not enough available for all of the proposed uses.

Ammonia seems unlikely as given the current price of ammonia of 0.80 - 0.85 $/kg and I am guessing that the railroads are paying about 0.65 $/kg for diesel with longer term contracts. AT a first blush this does not seem to bad but then ammonia has about 18.6 MJ/kg and diesel has about 43 MJ/kg so you are paying 3 times as much for ammonia.

The title of this article was "Researchers show economic, environmental and grid-resilience benefits of converting diesel trains to battery-electric"

Even if they did not car about the environment or grid-resilience, they certainly care about economics. Looking at their cost data, the implications is that the cost of going battery electric is about 2/3 that of staying with diesel. Currently, the railroads run about 150 to 200 miles between crew changes. Wabtec has a prototype battery electric with 2400 kWhr and I believe they are building a newer prototype with 7200 kWhr using GM's Ultium batteries. What I think would make sense is short sections of overhead power on the higher traffic density lines and especially on mountainous terrain. However, battery containers would work and the weight penalty is not that high on a railroad.

What they are proposing sounds good enough to me.
So you add one (or 2?) wagons full of batteries and use these instead of a diesel generator in a diesel-electric train.
It is very nice, because you still have the DE engine and can run it off diesel if you need to.
The only problem I can see is charging.
One solution could be partial catenary charging, where you put up overhead charging lines at various points on the track - they could be anywhere, and use these to charge on the go. You could use an automatic pantograph extension system, or let the driver do it (give them something to do).
In which case, if you covered 20% of the track, you would want to charge at 4x the drive power (or whatever, assuming you can spend some time charging when stopped).
Or you have extra battery wagons which you charge while the others are running.
(I can see that SD proposed something similar).

It looks like a general solution and could be used for passenger trains as well.
At least with trains, the weight and bulk of the batteries is not such a problem (unlike aircraft).

RNG production facilities in the U.S. that are operational, under construction or planned increased by 42 percent -- from 219 in early 2019 to 312 by the end of 2020.
That represents a 30 percent increase in production capacity since 2019.

It took only the most cursory search to find this report on RNG, which states on page 4 a number of figures which are only compared against residential NG consumption; commercial, power generation and other industrial are ignored.  If we start using NG for transportation in a big way, RNG isn't going to meet the needs.

LIVESTOCK MANURE AND LANDFILLS ACCOUNT FOR
27% OF METHANE EMISSIONS IN THE U.S.
https://www.cleanenergyfuels.com/?utm_source=google&utm_medium=cpc&utm_campaign=&gclid=EAIaIQobChMIirevl8u79AIVUuTICh3DdQyNEAAYASABEgL3UPD_BwE#why-rng

We should recover as much RNG as possible as anything would be better than having it escape into the atmosphere. However, it still not going to be enough to meet the proposed uses.

If we make methane by ANY means, we have to be extremely careful not to let it leak.  This means that we have to shut down active landfills, because they produce and leak methane from the onset of filling until they are sealed.