Ford has revealed the next-generation Ranger mid-size pickup truck. Order books for next-generation Ranger will open in Europe in late 2022 for customer delivery in early 2023. The current Ranger is Europe’s pick-up segment leader and recently set a new September year-to-date sales record of 45,539 units, with market share of 39.9%. 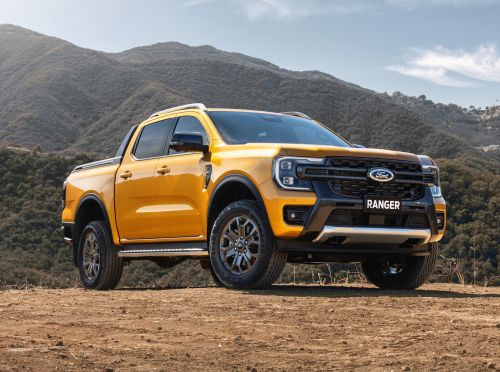 The next-gen Ranger project was led by Ford’s Product Development Center in Australia. Customer input was key to developing the next-generation Ranger’s rugged new look. Ford spent a lot of time with owners around the globe, conducting more than 5,000 interviews and dozens of customer workshops to understand how customers used their pick-ups and what they wanted and expected in the new Ranger.

Visually, the next-generation Ranger’ exterior shares Ford’s global truck design DNA. The design features a defined new grille, and signature C‑clamp headlight treatment at the front while a subtle shoulder line down the sides incorporates bolder wheel arches that gives Ranger a sure-footed stance. For the first time, Ford Ranger offers matrix LED headlights. At the back, the taillights are designed in harmony with the signature graphics on the front. Inside, the car‑like cabin steps up, using premium soft‑touch materials, and prominent portrait‑style center touchscreen with Ford’s SYNC 4 connectivity and entertainment system.

Beneath the new bodywork is an upgraded chassis riding on a wheelbase 50 mm longer and a track 50 mm wider than the prior Ranger. A hydro‑formed front‑end structure creates more space in the engine bay for the new V6 engine and helps future-proof the Ranger for other propulsion technologies. It also opens up the front of the pick-up to allow more airflow to the radiator, which helps keep running temperatures low when towing or carrying heavy loads. 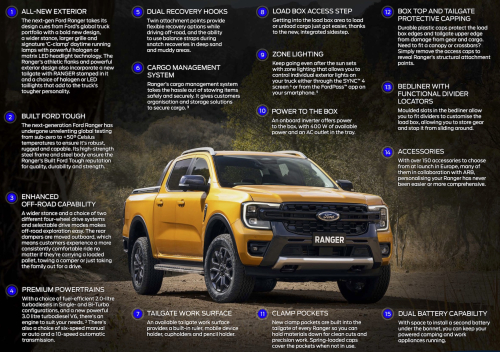 Customers wanted a choice of more power and torque for towing heavy loads and extreme off‑roading, so the team added Ford’s proven 3.0-liter V6 turbodiesel and developed it for the Ranger. It is one of three turbodiesel engine options available at launch, depending upon the market.

The 3.0-liter turbodiesel V6 delivers. When you drive a Ranger with the V6 turbodiesel, it feels like a much bigger truck. And it feels really tough in the sense that it’s got endless power and torque, which is exactly what our customers wanted.

The next-gen Ranger will also come with a choice of proven single-turbo and bi-turbo 2.0-liter in-line four-cylinder diesels. The single-turbo comes in two different performance levels and delivers power, torque and fuel economy, which is important to small business owners or commercial vehicle fleets. The bi-turbo engine is a more sophisticated, performance variant for customers who want more power but need to maintain fuel economy.

In addition, the next-gen Ranger will be available with a tried and tested 2.3-L EcoBoost four cylinder. New transmission choices include an updated 10-speed auto or six-speed manual, complementing the current six-speed automatic.

To develop the ride and handling expected of a truck customers use for a wide range of work, family and play, engineers focused on the fundamentals. We have a really wide spectrum of customers. On one end, you might have small business owners looking for very work-oriented transportation. They want traditional two-wheel drive with a single cab and a load box to transport their goods. At the extreme other end, you have the serious off-roaders who really push their Rangers to the limit with endurance races like the Dakar Rally. The next-gen Ranger will meet the needs of both types of customers and everyone in between.

Engineers moved the front wheels forward by 50 mm for a better approach angle and outboard for better off-road articulation, both of which improve the off‑roading experience. They also shifted the rear suspension dampers outboard of the frame rails to give drivers and passengers a better ride both on- and off‑road, no matter if they’re carrying heavy cargo for work, or just taking the family out for dinner.

Customers will have a choice of two four-wheel drive systems: an electronic shift-on-the-fly system, or an advanced new full-time four-wheel drive system with a reassuring set-and-forget mode, designed for capability when and where customers need it. Off-road recovery is made easier with prominent dual recovery hooks in the front bumper.

The next-generation Ranger will be built at Ford’s plants in Thailand and South Africa beginning in 2022, with other markets to be announced at a later date. Specific market launch details will be announced in due course.