Start-up DiviGas has announced a $3.6-million seed round to support the commercialization of a new next-generation polymeric hydrogen separation membrane. Divi-H, Divigas’ new polymeric membrane, can purify hydrogen up to 99.95% purity from any feedstock composition, with best in class recovery rate, and is the most robust system against adverse feed conditions.

The funding is led by the venture arm of MANN+HUMMEL (a global market leader in filtration and separations), Energy Revolution Ventures from the UK, Volta.VC from the US, and New York climate investor Albert Wenger.

Every year $110 billion of hydrogen gas is generated in refineries, chemical plants, and fertilizer plants of which 15%—$16 billion—are lost to flaring. Divi-H, DiviGas’ membrane, can recycle this previously unrecoverable hydrogen gas, netting the average refinery $3-6 million annually with a 2-3x return on investment (ROI).

Hydrogen production is also a major emitter of CO2, generating approximately 1000 million tons or more than 2% of global O2 emissions. DiviGas’ membrane enables the upgradingp of existing hydrogen plants to generate so-called ‘blue’ hydrogen where the CO2 is captured. According to the IEA, by 2050 the world will make 200 million tons of blue hydrogen, all of which will need better capture technology.

DiviGas’ membrane, Divi-H, effectively tackles these two problems, with a new polymer composition inside modules containing tens of thousands of polymeric hollow fibers. The result is a new level of performance due to its extra resistant properties (extreme acidic resistance with up to 150 ºC versus 50 ºC from other membranes). 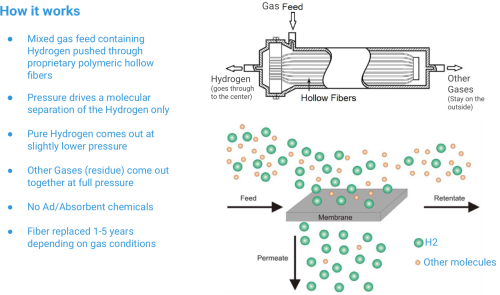 This financing round will enable the production of Divi-H at an industrial scale, under the first two mass manufacturing lines. These will allow the company to ship its first industrial-scale pilots with select partners and to continue the development of the next product, a CO2-purifying membrane.

The solution presented by DiviGas can operate in refineries, petrochemical plants, ammonia plants, methanol and metallurgical production, power-to-gas systems, gasifiers​​, and many other production facilities. The polymeric membrane, Divi-H, can be used in a wide range of applications, from fuel gas recovery to loop optimization through H2/CO adjustment and carbon capture.