A team of researchers from the US NSF Center for Sustainable Polymers based at the University of Minnesota Twin Cities has demonstrated the use of a dual cellular–heterogeneous catalytic strategy to produce olefins from glucose. 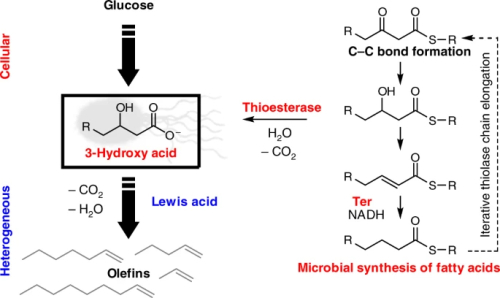 These renewable liquids could serve as a more sustainable replacement for today’s fossil fuels used to make everyday products such as plastic containers and bags, automobile parts, lubricants, and soaps. The new study by scientists at the University of California Berkeley and the University of Minnesota is published in Nature Chemistry.

It has been difficult to use plants as a source for plastics because they are mostly made up of sugars which are nothing like the molecules obtained from petroleum. The key sugar in plants is glucose, which contains too much oxygen and at six carbons is too small for many important applications.

In order to use plants to make new materials, both problems must be solved—the conversion process needs to strip oxygen atoms from the glucose, and molecules must be combined to make larger products.

The researchers at the NSF Center for Sustainable Polymers developed a process to make sustainable liquids similar to those obtained from petroleum by combining two normally independent technologies.

Our insight early on was that we needed to find a molecule that could be readily made with fermentation that could strip most oxygen from glucose. We optimized the chemistry to take advantage of the unique capabilities of molecular biology, after which we could solve the rest of the problem with metal nanoparticle catalysts.

—Michelle Chang, a Professor of Chemistry and Chemical and Biomolecular Engineering at the University of California Berkeley and leader of the project

In the second step, metal oxide catalysts stripped the oxygen remaining at the end of the chains and combined molecules together to make a useful distribution of olefins—the building blocks of the chemical industry.

Chang said the target molecule was designed to have oxygen left in strategic positions to make the downstream conversion more efficient for a group of researchers led by University of Minnesota Chemical Engineering and Materials Science Professor Paul Dauenhauer.

The biorenewable molecules that Professor Chang’s group made were perfect raw materials for catalytic refining. These molecules contained just enough oxygen that we could readily convert them to larger more useful molecules using metal nanoparticle catalysts. This allowed us to tune the distribution of molecular products as needed, just like conventional petroleum products except this time we were using renewable resources.

Dauenhauer’s laboratory at the University of Minnesota screened a broad array of catalysts to demonstrate that the bio-petroleum molecules made by fermentation could be converted to a range of important chemicals. The outcomes included small molecules for making key polymers such as polyethylene and polypropylene used in products like plastic bags and mid-size molecules for making rubbery materials.

Even more important was the ability to combine fermentation-product molecules together to produce larger molecules that can serve as the basis for manufacturing soap-like molecules for cleaning applications and longer chain molecules for lubricants.

The breadth of possible products depending on the selected catalyst and reaction conditions means that the combined fermentation-catalysis technology can be tuned to manufacture almost the full slate of unprocessed chemical materials that can be used in manufacturing processes—like conventional petroleum but with biorenewable resources.

The hybrid approach of combined fermentation and chemical refining has the benefit of competing economically with conventional products derived from fossil fuels while also improving sustainability. Technologies were integrated to find the lowest-energy and lowest-cost processing techniques leading to the most overall efficient method of making chemicals.

Initiated in 2009, the NSF Center for Sustainable Polymers has focused on transformational catalytic and fermentation technology to produce biorenewable materials.