SES (formerly known as SolidEnergy Systems), a developer of high-performance hybrid lithium-metal rechargeable batteries for electric vehicles (EVs) and other applications (earlier post), unveiled Apollo, a 107 Ah Li-Metal battery that is the largest in the world and is targeted at the automotive industry.

SES also announced the largest Li-metal facility in the world. Scheduled for completion in 2023, the Shanghai Giga will be a 300,000 square-foot facility located in Shanghai, capable of producing 1 GWh of Li-Metal batteries annually.

SES has addressed the dendrite safety problem associated with Li-metal batteries by coating lithium metal with a polymer coating and using a high-concentration electrolyte that suppresses the formation of dendrites. SES’ strategy is to dominate in the lithium metal battery market by first commercializing a hybrid method that combines a liquid electrolyte and a solid coating, which is easier to implement than an all-solid solution. 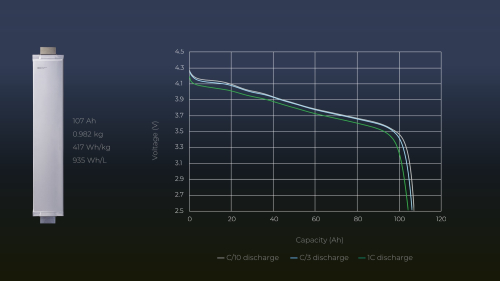 We have spent nearly a decade developing our hybrid Li-Metal battery. Batteries need to be capable of delivering high energy density over a wide range of temperature and power density. A car needs to work in hot and cold environments and perform seamlessly when driven fast or slowly. Solid state batteries can never achieve this performance at the level of our hybrid Li-Metal batteries.

SES looks like they will have Li-Metal battery cells in production soon (at least that is what their SES Battery World 2021 video claims: https://www.youtube.com/watch?v=ekKyfh7t5uY - it starts at 14:38).
Backed by Hyundai and GM they could be in autos by 2025. These can use either Nickel rich or LFP cathodes depending on the application.
What would be interesting to see if Dr. Passerini’s Dual Ionic Liquid Electrolyte could be used to extending battery life.
“Dual-anion ionic liquid electrolyte enables stable Ni-rich cathodes in lithium-metal batteries”, https://www.cell.com/joule/pdf/S2542-4351(21)00302-0.pdf
Note: Cuberg took an existing Li-Metal battery cell and added their Ionic Liquid Electrolyte.