AKASOL AG is introducing its third generation of battery systems manufactured in series production. The new AKASystem 9 AKM 150 CYC has the highest energy density available on the market, according to AKASOL, and is thus especially suitable for fully electric long-distance applications such as coaches or trucks.

The new system has a nominal energy of 98 kWh, which can be scaled as required with several systems. The ultra-high energy battery system will be manufactured in the Gigafactory 1 in Darmstadt from 2023.

The high gravimetric energy density in the same space as the predecessor system leads to significant efficiency improvements and an increased range. At the same time, it is a particularly cost-efficient battery system that offers flexible scaling options depending on the area of application. 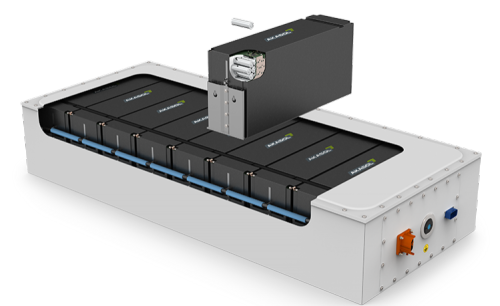 With a continuous charge rate of 1 C, the 98 kWh AKASystem 9 AKM 150 CYC enables a maximization of the range by up to 50% compared to conventional systems on the market, with simultaneous HPC (High Power Charging) capability. Due to the rapid charging capability (opportunity charging) and with charging processes during longer standstill times, for example overnight (depot charging), the use of the system can be flexibly designed, and the service life of the battery cells is optimized.

Service life is up to 4,000 charging cycles—making the lithium-ion battery system extremely long-lasting.

Active liquid cooling with a water-glycol mixture and good thermal insulation of the battery system make it possible to operate the cells in the ideal temperature range and achieve an associated improvement in performance with less ageing. The system design includes multiple safety features, such as two separate CPU cores to increase fail-safety. The AKASystem 9 AKM 150 CYC also has IP67 and IP6K9K protection classes, high fire protection and is developed according to the industry standard ISO 26262.

By using battery cells in the 21700-standard format, AKASOL benefits from the further development of the cells which is independent of the battery system. This also benefits future products, so that the energy density will be continuously increased in the coming years without adapting the system architecture. In addition to the increase in efficiency and cost savings, the use of standard cells also enables a high availability of battery cells through various manufacturers with global production facilities.

Production of the new AKASystem 9 AKM 150 CYC ultra-high energy battery system will start next year in Gigafactory 1 in Darmstadt. This will be followed by a plant in Hazel Park, USA, in 2023, said Holger Dilchert, Head of Sales On-Highway at AKASOL.

The highly automated and fully networked production in Gigafactory 1 in Darmstadt already has 1 GWh of installed production capacity and will be increased to 2.5 GWh in the course of 2022. Depending on customer demand, it can be expanded to 5 GWh in Darmstadt in the future. In Hazel Park, the production capacity will be increased to 2 GWh by 2023. AKASOL will thus be able to significantly increase the production of lithium-ion battery systems for commercial vehicles on both continents in the near future.