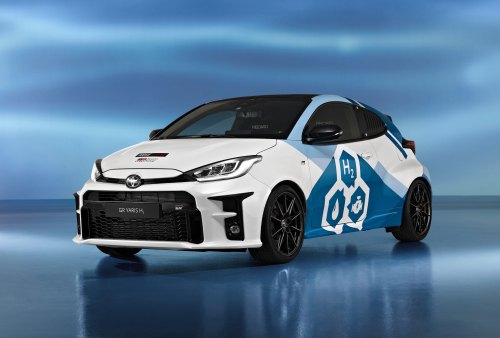 While the Mirai employs chemical reaction in the fuel cells to generate energy, the experimental GR Yaris features an internal combustion engine with hydrogen as the fuel.

While the hydrogen combustion engine technology is still in the early stages of conceptual development and experimentation (which started in 2017 and is not yet ready for commercialisation), Toyota’s experimental hydrogen-powered Corolla Sport is already delivering high performance at motorsport events in Japan with almost zero tailpipe emissions.

Japan’s auto industry must succeed in building passenger vehicles. To this end, manufacturers must participate in auto-racing to test their vehicles’ durability and performance and display their utmost performance. With competition comes progress, as well as excitement among motoring fans. The aim of racing is not just to satisfy our curiosity, but rather to enable the development of the Japanese passenger vehicle industry.

The hydrogen-powered experimental GR Yaris and the Corolla Sport both feature the same G16E-GTS, 1.6-liter, in-line 3-cylinder, turbocharged engine that is found in the award-winning GR Yaris, but with a modified fuel supply and injection system for use with hydrogen as fuel.

Hydrogen combusts at a faster rate than gasoline, resulting in good responsiveness whilst delivering excellent environmental performance. In addition to being extremely clean, hydrogen combustion has the added potential to relay a fun to drive experience with the acoustic and sensory sensations that characterize internal combustion engines.

We’ve taken the first step to compete with and develop our hydrogen-powered engine with the mindset of taking on the challenge. I imagine things will look a little different 10 years from now, and I hope people will look back and see how we took on the challenge with positivity and enjoyed every moment of it.

Why? Is this Toyota's WTF vehicle of the month?

"... a fun to drive experience with the acoustic and sensory sensations that characterize internal combustion engines." You need to hear the roar of the engine to imagine that it is a performance car. I find that it is more fun to blow off the noisy "tuner" cars and the turbo diesel pickups with their oversize exhaust with my quiet EV.

"I imagine things will look a little different 10 years from now, and I hope people will look back and see how we took on the challenge with positivity and enjoyed every moment of it. —Akio Toyoda"

Well, maybe in 10 years they will look back and ask "Whatever happened to Toyota"?

The efficiency of an H2 ICE is abysmal. Anyone who takes a close look at the practical realities of this approach (reciprocal engine) can only shake their head in amazement at the utter detachment from reality by Toyoda and every upper management sycophant that supports this distracting boondoggle.

Toyota has the financial and technical resources to be the world leader in zero emission vehicles but will give it all up for the chimera of a hydrogen future.

BMW gave up on H2 ICE long ago after realizing the volume required for adequate H2 storage made the approach completely impractical.

Toyota apparently still needs to learn that lesson, or at least that few people will be fooled by the head fake.

Maybe they are thinking about a special racing series.
However, the best Toyota idea is the $30K Corolla JV with BYD, unfortunately only for China.
https://electrek.co/2021/12/02/toyota-partners-byd-affordable-electric-car/

I read the electrek.co article. Not much in hard information other than it will cost under ~$30,000 and will have lithium iron phosphate batteries. However, you can buy a 2022 Chevrolet Bolt which is probably a more capable vehicle that has a range of EPA range of 260 miles with a list price of $31,000. So I would not be impressed with Toyota's JV with BYD.

Hitting the second link comes up with an article titled "Toyota CEO shows lack of vision, spreads EV misinformation, and spells the end for the automaker" Electrek does not seem to have a very high opinion of Akio Toyoda or the current path that Toyota is taking. Oh well.

If they don't get their three-letter organ into gear, they'll most certainly go bust. The ICE is a stone age contrivance irregardless with what it is fueled and everyone in general (excepting fools) is prepared to depart from it.