The Saudi Arabian Oil Company (Aramco) signed five agreements with leading French companies, including an agreement to explore a hydrogen-powered vehicle business with Gaussin, a pioneer in clean and intelligent transport solutions.

The two companies also agreed that Aramco’s Advanced Innovation Center (LAB7) will be closely involved in Gaussin’s development of hydrogen-powered vehicles and the development of a remote controlled/autonomous hydrogen racing truck.

LAB7 aims to integrate Aramco’s composite materials into Gaussin’s existing range of products to reduce the weight, energy consumption and cost of these vehicles.

Aramco will also be sponsoring the world’s first hydrogen-fueled racing truck, which has been developed by Gaussin and which will compete in the 2022 Dakar Rally in Saudi Arabia. Aramco’s sponsorship of Gaussin’s participation in the Dakar Rally continues to promote low-emission transportation technology developments. As a part of this agreement, Aramco also has the option to subscribe for up to 20% of the common stock of Gaussin shares. 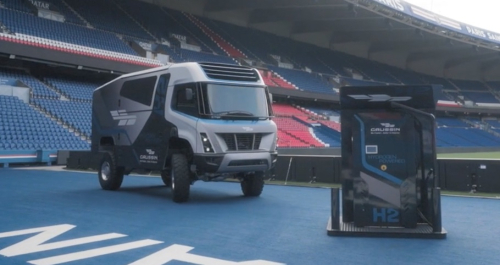 Additional MoUs. The other agreements seek to further Aramco’s research and development in the areas of carbon capture technology, artificial intelligence and local manufacturing. The MoUs include:

That's great news! Thanks for sharing!
I believe that nowadays every company must be eco- and socially responsible!
As a student of Business and Technology, I like cases and companies with such philosophy and values (By the way, you can find btec help at https://assignmentbro.com/uk/btec-assignment website) Still, if we can't reduce oil use, we need to find out new ways to save the resources.