Researchers at the at the Max Planck Institute for Coal Research (Max-Planck-Institut für Kohlenforschung) report the mechanocatalytic synthesis of ammonia over a cesium-promoted iron catalyst under mild conditions—room temperature and pressures down to 1 bar.

Ammonia synthesis via the Haber-Bosch process normally requires temperatures of 400-500 °C and pressures of 150-300 bar. An open-access paper on their work is published in the journal Angewandte Chemie International Edition.

Ammonia is the basis of all nitrogen-containing fertilizers and is under discussion as transport and storage molecule for hydrogen in future energy systems. It is estimated that currently about 2% of the global energy demand is used for ammonia synthesis. 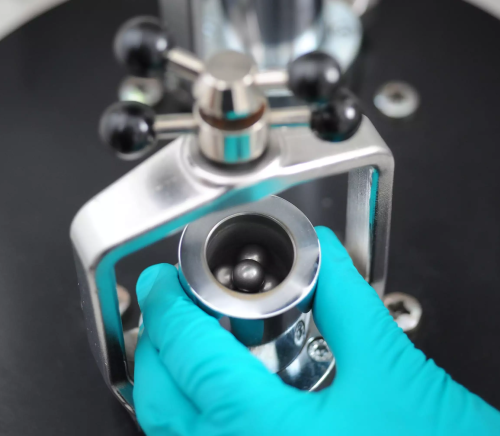 The grinding process in a ball mill activates a catalyst in such a way that it facilitates the synthesis of ammonia at a much lower temperature and pressure than is necessary in the well-established Haber-Bosch process. © Frank Vinken / MPG

Although optimized for more than 100 years, the Haber-Bosch process still requires essentially the conditions applied at its invention: high temperatures of up to 500 °C and reaction pressures of up to 200 bar to achieve reasonable ammonia concentrations at sufficiently high rates. The most significant innovation was the introduction of ruthenium-based catalysts, showing high activity also at somewhat lower pressures. Nonetheless, ammonia production still is dominated by the iron-catalyzed Haber-Bosch process, with the ruthenium catalyst used in some plants in a last reactor downstream of the main, iron-catalyzed reaction.

… In recent years, mechanochemistry has evolved as a promising alternative strategy for the activation and transformation of molecules. Also heterogeneously catalyzed gas-phase reactions can be mechanically activated, resulting in significant enhancements of activity. Due to the high importance, mechanocatalytic ammonia synthesis has also been attempted, albeit in less than a handful of reports with partly unclear validity of the claims.

… we have developed a system for the mechanocatalytic synthesis of ammonia from its elements working at room-temperature and down to atmospheric pressure. While several systems were identified that led to ammonia formation, the most promising systems consists of a mixture of iron with small amounts of elemental cesium. This catalytic system operates both under batch conditions and in a continuous process for more than 60 h, leading to continuous formation of ammonia at values up to 0.26 vol. %.

This study demonstrates the continuous catalytic synthesis of ammonia from the elements in a manner probably similar to the Haber-Bosch process, but at ambient temperature and pressure conditions due to the influence of mechanical forces, something which has remained elusive in spite of more than hundred years of efforts via different approaches.

It seems to me that all the elements for an ammonia/hydrogen economy are coming into view.

Of course where electricity is produced at the right times and can be used without losses, that is the way to go, but batteries are way, way too expensive for many applications and storage issues, and enthusiasts elide the difficulties of cost reduction.

The 'success' of BEV cars has been in heavily subsidised and mandated luxury vehicles, or very low range city cars, and as Toyota say they are a very long way indeed from being able to provide economic transport for the masses.

That is aside from the many areas such as long distance marine or steel making where batteries are more or less irrelevant.

CAES can be more than 70% efficient

This is an interesting research project and maybe it will lead to lower cost ammonia. I would be a little concerned about what happens to the balls as normally the balls in a ball mill are used up but maybe it is possible to reuse the material and reconstitute the balls. However, if you notice the hand in the picture, this is just a very small scale lab experiment and even if it is possible to scale it up, it is years away from being used in production.

Maybe Toyota can not figure out how to make a low cost BEV, but General Motors and Nissan seem to have it figured out. A 2022 Nissan Leaf with a range of 150 miles has a base list price of $27,400 and a 2022 Chevy Bolt with a range of 260 miles has a base list of $31,000 and usually, you can get the vehicles at a discount. Note that these are prices without any subsidies. By comparison, the Toyota Prius Prime has a base price of $28,220. Also, the new Ford battery electric pickup is only about $1500 more than a comparable gasoline pickup so maybe Ford has also figured it out.