Using a microscopic method for measuring electrical potential, a team of scientists at Sandia National Laboratories may have discovered how to identify rate-limiting processes in solid-state batteries. The findings are detailed in a paper in American Chemical Society Energy Letters.

The performance of solid-state electrochemical systems is intimately tied to the potential and lithium distributions across electrolyte–electrode junctions that give rise to interface impedance. Here, we combine two operando methods, Kelvin probe force microscopy (KPFM) and neutron depth profiling (NDP), to identify the rate-limiting interface in operating Si-LiPON-LiCoO2 solid-state batteries by mapping the contact potential difference (CPD) and the corresponding Li distributions.

The contributions from ions, electrons, and interfaces are deconvolved by correlating the CPD profiles with Li-concentration profiles and by comparisons with first-principles-informed modeling. We find that the largest potential drop and variation in the Li concentration occur at the anode–electrolyte interface, with a smaller drop at the cathode–electrolyte interface and a shallow gradient within the bulk electrolyte. Correlating these results with electrochemical impedance spectroscopy following battery cycling at low and high rates confirms a long-standing conjecture linking large potential drops with a rate-limiting interfacial process. 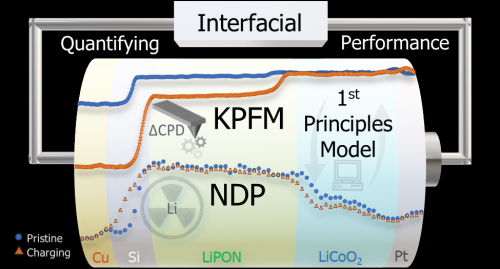 Solid-state batteries employ solid electrolytes instead of electrochemical gels and liquids and generally power small electronics. Most researchers suspected that there was a loss of voltage or electrical potential at interfaces within the battery, but not which interface was responsible for most of the impedance in the battery. The team started work five years ago to get some clarity.

There were two main motivations for this. The first was fundamental: we want to have good models for batteries that we can use to develop better materials. The second thing was to figure out how we can engineer the interfaces to make them less impeding. In our case, it really has to do a lot with how fast lithium ions can move in the Si anode used in the study.

The team found that a large part of the electrical potential of the battery was getting lost at the boundary between the electrolyte and the anode (negative) terminal.

To validate the data by measuring where the lithium ions were at different states during charging, the team worked with researchers at the National Institute of Standards and Technology Center for Neutron Research using a technique called neutron depth profiling that can measure where lithium ions are at a particular moment.

We’re going to use this technique to look at other batteries as well as other solid-state electrical systems, like the electrochemical random access memory invented at Sandia. This will allow us to develop devices that operate like we would like them to operate.

The work was done in collaboration with NIST, Naval Research Labs, University of Maryland College Park and Brown University. It was sponsored through Sandia’s Laboratory Directed Research and Development Lithium Battery Grand Challenge and the Nanostructures for Electrical Energy Storage Energy Frontiers Research Center as well as the Platforms core program, both led by the University of Maryland and sponsored by the DOE Office of Basic Energy Sciences.