United is the leading airline in the usage and support for the development of SAF, already having agreements to purchase nearly twice as much SAF as the known agreements of all other global airlines combined. SAF has the potential to deliver the performance of petroleum-based jet fuel but with a fraction of its carbon footprint, and according to the US Department of Energy, the country’s feedstock resources are enough to meet the projected fuel demand of the entire US aviation industry.

The demonstration flight, which departed with more than 100 passengers from Chicago’s O’Hare International Airport to Washington, D.C.’s Reagan National Airport, was on a new United 737 MAX 8. The aircraft used 500 gallons of SAF in one engine and the same amount of conventional jet fuel in the other engine to further prove there are no operational differences between the two and to set the stage for more scalable uses of SAF by all airlines in the future. 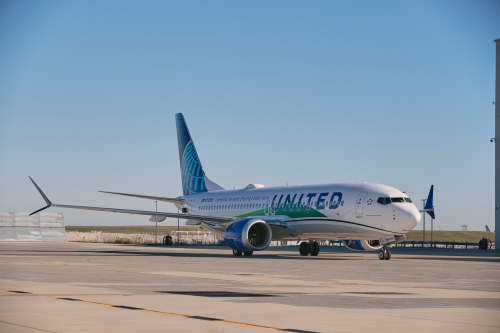 Currently, airlines are only permitted to use a maximum of 50% SAF on board. The SAF used on the demonstration flight is drop-in ready and compatible with existing aircraft fleets.

Eco-Skies Alliance. United launched the Eco-Skies Alliance program in April 2021; the Alliance has collectively contributed toward the purchase of more than 7 million gallons of SAF this year alone. With its nearly 80% greenhouse gas (GHG) emissions reductions on a lifecycle basis compared to conventional jet fuel, this is enough SAF to eliminate approximately 66,000 metric tons of GHG emissions, or enough to fly passengers more than 460 million miles. Including today’s newly announced participants, the program has nearly 30 participants including companies such as DHL Global Forwarding, HP Inc. and Nike.