VERBIO begins production of biomethane from corn stover in Iowa; first-large scale plant in US

VERBIO has commenced production at its new plant in Nevada, Iowa. The plant will generate biomethane from corn stover (maize straw), and is the first large-scale commercial plant in the US to use the technology developed by VERBIO. 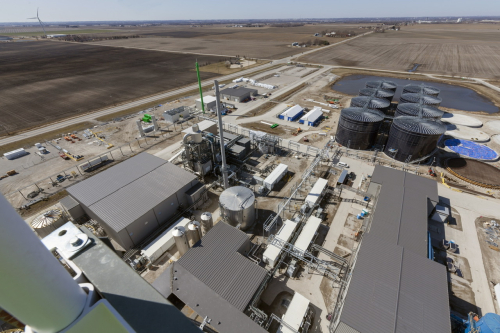 VERBIO acquired the mothballed cellulosic ethanol plant from DuPont, the previous operator, at the end of 2018.

VERBIO’s technology produces RNG from pure cellulosic material, such as corn stover or wheat straw. The feedstock undergoes the process of anaerobic digestion in large tanks over the course of 20-60 days. During this process, raw biogas is produced comprising about 55% methane and 45% carbon dioxide.

Carbon dioxide and other impurities are removed through a biogas treatment process, leaving nearly pure biomethane gas which is chemically equivalent to fossil natural gas. This biomethane is then suitable for injection into the natural gas transmission or distribution grid.

It was our first major foreign investment and our entry into the North American market. We have expanded the plant to include biomethane production based on the model we use at our German locations, and now we are providing green fuels for the American market manufactured from excess maize straw. Our technology does not only create a climate-friendly fuel and a high-value fertilizer, it also prevents the release of additional emissions from agricultural production that would have resulted from the maize straw being left to rot in the fields. This turns driving vehicles into a form of climate protection.

The successful launch of the production plant in the American Midwest is the starting point for VERBIO’s further expansion plans in the US. In the initial phase the plant will be ramped up to a capacity of 20 MW, and thereafter it will be able to process 100,000 tonnes of straw annually, converting it into biomethane. By the end of 2022 the plant will have been expanded based on the model used in VERBIO’s German plants to offer combined bioethanol-biomethane production.

55% methane and 45% carbon dioxide.
Store the CO2 in empty natural gas wells
for later use

45% CO2 by volume amounts to 45% loss of the carbon in the feedstock as a waste product.

This waste should be regarded as criminal.

Turning waste like corn stover (maize straw) into energy is absolutely awesome. Pure natural gas is produced and this can also be used in our beloved ICE powered cars. In Germany I drive a BMW E36 Compact 316g. Very old but durable, rustproof BMW. Thanks - I like waste to energy.

There are natural gas processing plants that store the carbon
in the ground, better than putting it in the air

I like energy from nuclear.  Crop residues and garbage are best used as carbon sources, not energy sources.  You can deliver more net energy by gasifying lignocellulose with steam and external heat, then converting to methanol.  Throwing energy in, rather than taking energy out, will replace a lot more fossil fuel.

There are many products currently derived from fossil fuels that will need to be obtained from other sources.
The biomass / Gas To Liquids / fuels? /oils/ chemical streams /plastics stream from biomass would soak up any leftover carbon . The amount left available to supply fuels for most of the hard to abate industries is estimated to be negligible.

The biomass / Gas To Liquids / fuels? /oils/ chemical streams /plastics stream from biomass would soak up any leftover carbon . The amount left available to supply fuels for most of the hard to abate industries is estimated to be negligible.

Maybe for the world, but not for the USA.  Have a look at Heat content of petroleum products supplied by type.  Nearly half of this is motor gasoline, of which 75-80% is easy to replace with electricity.  The column you're talking about is "Other", which per footnote f includes petrochemical feedstocks; that's a fairly small amount, a mere 2.585 quads in pre-COVID 2019.  That leaves plenty for things like truck fuel and jet fuel.

And SJC, it's hilarious to see you taking up my talking points.

E-P,
Completely agree with all of your comments. No luck in finding what VERBIO is doing with the CO2 (only that they are a working with BASF for CCS).
Carbon is an asset and Bio Carbon is important because it should be recycled, i.e. BECCS. One company is doing exactly what you said:
“gasifying lignocellulose with steam and external heat, then converting to methanol.”
Liquid Wind (https://www.liquidwind.se/emethanol) is partnering with Uddevalla Energi for the CO2. Proving it can be done.