The transport carrier in the Czech city of Ústí nad Labem and Solaris Bus & Coach have signed a framework agreement for the purchase of zero-emission Urbino 12 hydrogen buses. It covers a period of 8 years; during this time the carrier may order up to 20 hydrogen buses. 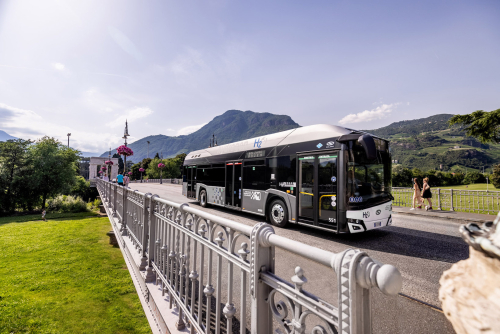 Once the vehicles have been ordered, they are to be delivered within 420 days of the purchase contract being signed. This is the first contract for hydrogen buses in the Czech Republic, however, it is not the first collaboration between the bus maker and the city of Ústí nad Labem. Currently, 44 Solaris buses with different types of propulsion systems are deployed there in public transport.

The Urbino 12 hydrogen buses will be equipped with two 125 kW electric motors each, packs of 70 kW fuel cells and five composite tanks for hydrogen storage with a total capacity of 1560 liters. The buses will be capable of covering at least 350 km (217 miles) on a single refill. They will also feature a relatively small Solaris High Power traction battery the role of which is to support the fuel cell in moments of increased demand for electric power.

The Urbino 12 hydrogen buses destined for the city of Ústí nad Labem will feature a passenger counting system, a system for visually impaired passengers, as well as USB charging sockets for each row of seats. They will also be equipped with air conditioning that uses a CO2 heat pump.

At present, Solaris has signed contracts for, and delivered, almost 100 Urbino 12 hydrogen buses to its clients. The company has concluded contracts and framework agreements with carriers from Austria, France, the Netherlands, Germany, Poland, Sweden and Italy. This group of countries has now been joined by the Czech Republic.