Over the entire lifecycle (with use over 300,000 kilometers and recycling), the new plug-in hybrid Mercedes-Benz S 580 e (earlier post) produces around 14.1 (charging with European power mix) or 36.2 percent (hydroelectric power) lower CO₂ emissions than its predecessor, the S 560 e, according to Mercedes-Benz’ 360° environmental check. 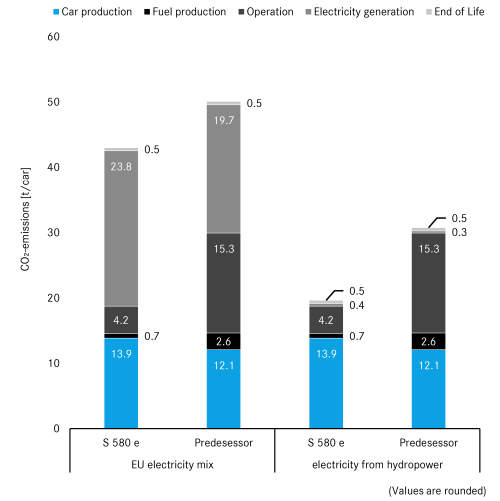 The S 580 e is produced in the highly flexible and efficient Factory 56 in Sindelfingen. Installed on its roof is a photovoltaic system with around 12,000 PV modules and an output of around 5,000 kWp (kilowatt peak). This feeds self-generated green electricity to the production shop. 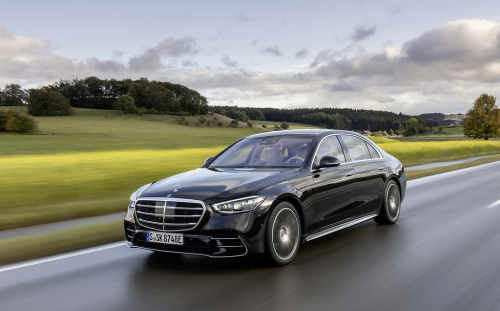 The upstream production of materials and components creates more carbon dioxide than for the previous model. This is mainly due to the increased light-alloy content in the bodyshell and the larger high-voltage battery with a capacity of 28.6 kWh.

This disadvantage in production can be more than compensated for in the use phase: doubling the electric operating range leads to a significantly higher proportion of all-electric journeys.

Alongside the CO2 improvement, the S 580 e also has advantages over its predecessor with respect to its eutrophication (EP) and summer smog (POCP) potential . Thanks to the higher proportion of all-electric driving, the consumption of fossil resources (ADP fossil) can be reduced by 16 percent (European power mix) or 59 percent (hydroelectric power) respectively.

More results from the 360° environmental check:

The fourth generation of the hybrid drive system celebrated its premiere in the new S-Class. In addition to the S 580 e, the S 580 e 4MATIC recently and for the first time introduced a plug-in hybrid with all-wheel drive into this segment.

With an electric power output of 110 kW/150 hp and an all-electric range of more than 100 kilometers (WLTP), both models can be driven without the use of the combustion engine in many cases. The basis for the hybrid drive system is provided by the six-cylinder in-line M 256 engine with 270 kW/367 hp from the current generation of Mercedes-Benz engines. The high power density of the hybrid traction head is achieved using a permanently excited synchronous motor with internal rotor.

The 480 N·m peak torque of the electric motor is available right from the start, resulting in high agility when moving off, along with dynamic driving performance. The top speed in the ELECTRIC driving mode is 140 km/h, after which the speed is gently limited.

An 11 kW charger is on board as standard for three-phase charging from the AC mains network. A 60 kW DC charger is available for fast charging with direct current. Even an empty battery can be fully charged in around 30 minutes.

Wow! a PHEV has a larger battery than a Mk1 Leaf! (28.6 > 24 kWh)
I guess this is the way to go, but I would favour something like a Nissan e-power system where the fuel engine is mainly a generator rather than a motive power generator.
(but maybe the typical drivers of a Merc S class would disagree).
Consider a plug in e-power with 10 kWh of storage:
You should be able to do your average daily drive (~50 km) from mains charged battery and only use the generator for the longer runs.

Good analogy of 2013 Nissan Leaf battery. However, like the leaf a 2019 Nissan Leaf with a 40 kWh battery costs the same. What changed?
A 2014 Mercedes S550e had a 8.7 kWh, then in 2017 13.5 kWh, now 28.6 kWh. Battery module energy density and cost/kWh improved in 8 years. Do you think Mercedes Benz will redesign the entire battery including BMS just for a reduced energy rating or cut the price? Not likely.
The S 580e competes in price with $120k BEV, e.g. Tesla Model S, e-Tron or a EQS.
Most people do not have the discipline to do nightly charging on a PHEV, though on this car you can have wireless charging and not even think about it.

I have the discipline to charge sometimes several times a day.  Occasionally I forget to plug in, but that's rare.

Again a Mercedes PHEV that can be very environmentally friendly. Now less ecological in the production than a pure ICE but later in the full hybrid module then ecological. But I also ask why such a huge car if a Tesla Model Y or Chevrolet Bolt or EUV make perfect sense for the trips! Or do the drivers just want to "present something big!" which was paid by the American taxpayer?

I also note that no private person drives 300,000 km or 140,000 miles within 20 years. Now what sense does this PHEV vehicle make if it only becomes more ecological like a pure ICE drive of the car after 300Tkm or 140Tmls? Are the EPA and politicians calculating completely wrong here? YES!

I have never driven for hire.

PHEVs make a lot of sense for a lot of people.

PHEV’s do make a lot of sense for a lot of people. Particularly, for larger SUV and trucks which make up over 60% of U.S. Vehicle sales. A Ford F-150 Lightning has a 131 kWh battery for 300 miles of range (and a lot less on the highway or pulling a trailer) and that is a really large battery.
The next generation BEV should be similar in performance to a Lucid Air which has a 516 mile range with a 112 kWh battery (and almost that range @ 75mph). So BEV should be able to manage with 75kWh or less for a 300 mile range.
If the automakers design a PHEV like a Lucid Air then you could get a 100 mile range from a 22 kWh battery (similar size to a RAV4) and use a LFP battery like the Guoxuan Hi-Tech aka GotIon 210 W/hr cell (next gen will have 260 W/hr) for a 100s1p battery that weighs around 100 kg, Note: Cost < $1500.
And like @mahonj says use “a plug in e-power” I.e. Nissan Series hybrid or similar.

I have designed the Ultimate PHEV based on the Audi RS Q e-Tron Rallye Dakar. Ford/VW need to build this, please (btw they are working jointly on the next gen Ranger/Amarok).
https://www.motorauthority.com/news/1127477_2022-volkswagen-amarok-spy-shots
1. GotIon LFP Battery (partly owned by VW and coming to America).
https://electrek.co/guides/gotion-high-tech/

2. 3 200 hp electric motors (great if they were like the MAHLE Induction rare earth free motors and 96% efficient). One motor is a generator, the other two drive front and rear axle, i.e. AWD and 400 hp.
https://www.mahle.com/en/news-and-press/press-releases/mahle-develops-highly-efficient-magnet-free-electric-motor--82368

I can usually handle that.

I have had a Chevy Bolt which is what I would consider a relatively small car. In the 32 months that I have owned the car, I have driven it 47,000 miles or 75,000 km. To me the car makes a lot sense as it costs about 2.5 cents a mile to drive and the only maintenance other than tire rotations that I have performed has been has been to replace the rear wiper blade.